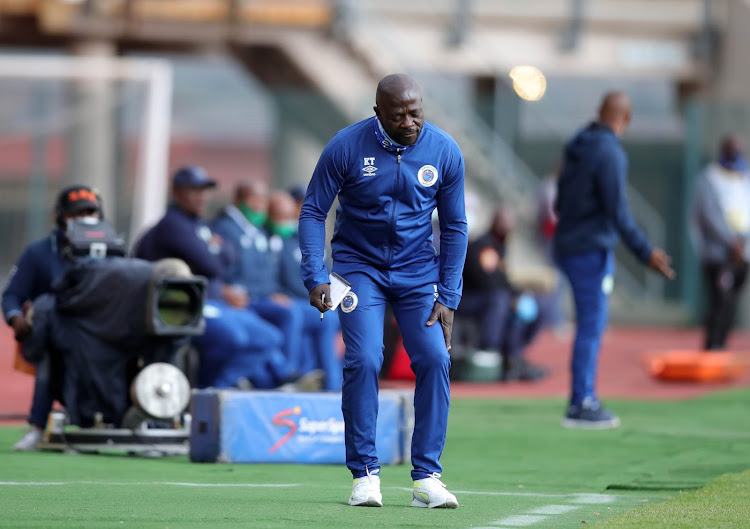 SuperSport United head coach Kaitano Tembo is not satisfied with the way his team has defended since the start of the new season.
Image: Samuel Shivambu/BackpagePix

SuperSport United coach Kaitano Tembo has admitted that their defending has been a huge source of concern since the start of the season last month and they are struggling to maintain any level of consistency at the back.

The United coach was left to pull his hair out in frustration after a mistake by young defender Luke Fleurs led to Orlando Pirates getting the winner from Tshegofatso Mabasa three minutes from time in a 2-1 defeat at Orlando Stadium at the weekend.

It was United's second defeat in four DStv Premiership matches and further illustrated the side's frailties at the back.

“I think all we needed was to try to see the game through because to be fair‚ they (Pirates) didn’t look like scoring‚” Tembo said after Saturday’s defeat.

“And critically‚ I think three minutes before the end we went to sleep. But I think he’s the youngster‚ Fleurs‚ and I think he had a fantastic game.

“I think he played well and he can only learn from these mistakes and can only get better from there on.”

But it was the 20-year-old Fleurs’ miscommunication with goalkeeper and Ronwen Williams that led to the Bucs stealing all the three points.

Tembo said injuries to some key players at the back have created a lot of inconsistencies and instability in their defensive line.

“But to be fair‚ I think defensively we’ve been struggling with injuries.

"Some players have been out since the season started and those include Grant (Kekana) and Luke Fleurs. But I thought they had a very good game apart from the two goals we conceded.”

The United coach said they were in control of the game up until the Bucs started to dominate possession after making changes in the second stanza.

“The second half was a little bit difficult with the changes (five) they made‚” said the United coach.

“They started to dominate the midfield a little bit but still‚ I thought we played well and it’s only that we played in phases.

“But the main issue for me was scoring goals and we didn’t look like we were going to score‚ and we didn’t really deserve to win the game.”

The only positives for Tembo were Mokoena finding the back of the net for the third time this season‚ and Sipho Mbule returning from injury to bolster his options in the midfield area.

“[These were the few] positive things that came out of this game because we really missed Mbule’s creativity‚” Tembo said.

With regards to Mokoena‚ Tembo said he was happy that the young Bafana Bafana player keeps improving his game and is also contributing with vital goals.

“You know Teboho has got so much ability. He helps with the defensive duties but in going forward he’s very creative as well.

“We’ve been encouraging him to do that (go forward)‚ he’s done well and he’s scored three goals from midfield.

“I think we tried to encourage him to do that more often because he’s a quality player. I’m happy with his progress so far and I hope other guys can start scoring the goals as well.”

Tembo says he expect all his midfielders to be versatile‚ defend and attack at any given time during the game.

“You could see as well with Sipho (Mbule) dropping a little bit deeper to try and fetch the ball‚ which means Tebza (Mokoena) has to push a little bit ahead of him and higher up.

“So it’s a rotation in terms of movements. It doesn’t really have to do with Tebza that he had to sit deeper. If he finds himself in an attacking position he’s got to go up because he’s also an attacking player.

“If you look at them‚ I have Sipho Mbule‚ Moses Waiswa‚ Jammie Webber as well as Tebza‚ they all attack. So it’s not really about them playing more defensive.”

Tembo will hope United bounce back with a positive result on Friday when they visit bottom-placed Maritzburg United. The KwaZulu-Natal side have struggled this season‚ losing all their opening four league games this season.