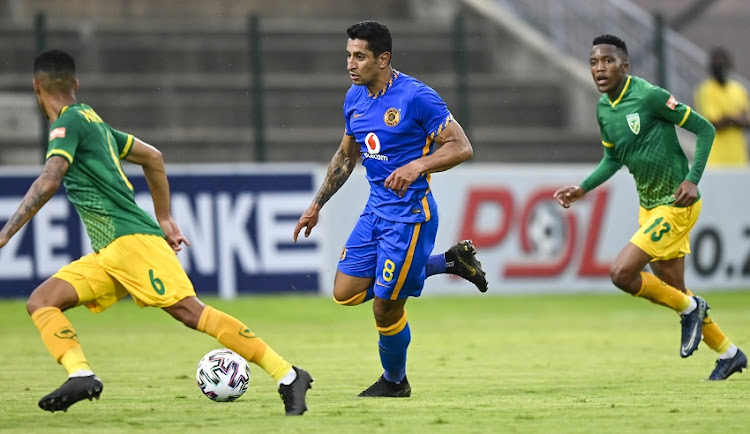 Kaizer Chiefs showed encouraging signs of increased toughness that might have pleased coach Gavin Hunt‚ even as they had to settle for a 2-2 DStv Premiership draw against Lamontville Golden Arrows at Durban's Sugar Ray Xulu Stadium on Saturday.

Arrows wing Siboniso Conco put his side ahead from a 49th-minute penalty before Leonardo Castro's 58th and 65th-minute strikes for Chiefs. Substitute Nduduzo Sibiya equalised for Arrows in the 70th.

When things are loose and messy‚ a 3-5-2 formation to pack the midfield and steady the defence‚ with wingbacks marauding up and down to provide numbers at the back and attack‚ can be the solution to tough out much-needed results.

Coming off the 5-0 aggregate thrashing to Orlando Pirates in two legs of the MTN8 semifinal‚ which sandwiched a poor 0-0 draw against TS Galaxy‚ it seemed a sensible system for Hunt - still seeking his combinations - to employ away against an Arrows who had started with two draws and a win in the Premiership.

There seemed elements that would have encouraged Hunt as he seeks form and stability in a rough start at his new club.

Chiefs showed fight and structure‚ and kept things simple‚ creating better chances and crucially finally scoring their first two goals in the 2020-21 Premiership. Looseness at the back will continue to not please the coach. Goals‚ though‚ can be a more intangible aspect to rectify for coaches than tightening a defence.

After some early looseness‚ and chances to Arrows' Michael Gumede and Conco‚ Chiefs tightened‚ started to close spaces‚ win the ball‚ and look for the direct entries.

Castro at the start of the season has found positions as easily as the woodwork or opposition goalkeeper. In a patient build-up‚ Philani Zulu's cross was accurate but centimetres too high for the Colombian‚ who had to arch his back‚ his header looping onto the crossbar.

Ramahlwe Mphahlele and Castro forced close saves from Sifiso Mlungwana before the break.

Having ended the opening half with promise‚ Chiefs had a soft penalty decision go against them at the start of the second. Gumede chested into the patch of left-back Zolani Nkombelo‚ as replays showed Katsande won the ball‚ but the Arrows player went down.

Referee Olani Kwinda pointed to the spot. Winger Conco stepped up and slotted easily low to the left‚ as Itumeleng Khune dived right.

The setback needed to spur a fired-up response from Chiefs. It did.

Billiat's deflected shot earned a corner that the Zimbabwean took‚ Castro getting up to finally find the back‚ rather than the frame‚ of the net.

As Arrows could not clear from a delightful Chiefs build-up that included the sublime touches of Nkosingiphile Ngcobo‚ Zulu and Lebogang Manyama‚ Billiat was through to beat Mlungwana‚ Castro getting the last touch over the line.

But Arrows substitutes Knox Mutizwa and Sibiya combined for an equaliser‚ the former backheeling and the latter smacking past Khune from just outside the area.