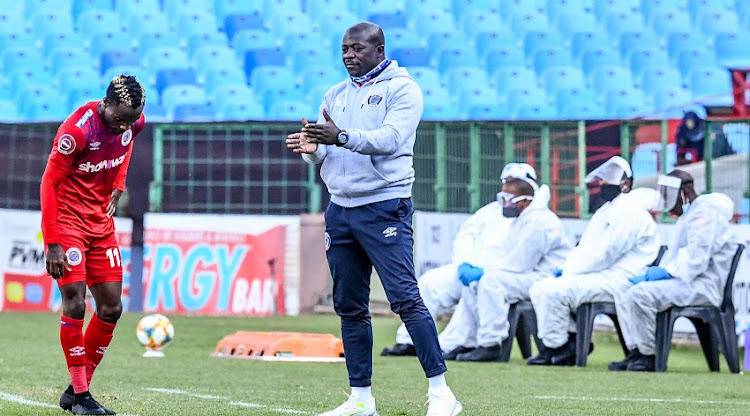 Having had six players on national duty over the past few days of the Fifa week has negatively impacted on SuperSport United coach Kaitano Tembo’s preparations for their visit to Orlando Pirates on Saturday.

SuperSport hit the road to Orlando Stadium in Soweto for the DStv Premiership match against the Buccaneers and Tembo is concerned that some of his players may not have sufficiently recovered from fatigue of travelling.

“International call-ups have an impact on preparations because some of the players only came back today [Thursday] and this means we only have one day to prepare‚” said Tembo.

“You can’t really prepare properly because you need to have all the players and the other thing is that you are not sure how they are feeling because of the travelling. Some might be fatigued and you will only know their mental and physical state once they are back.

“At the same time‚ this international break gave us an opportunity to work on guys who have been missing for reasons like injuries.”

Midfielder Jamie Webber travelled to Saudi Arabia with the national Under-23 side while Teboho Mokoena and Ronwen Wiliams were part of Bafana Bafana’s squad that hosted São Tomé and Príncipe in Afcon qualifiers in Durban and Port Elizabeth.

Ghampani Lungu and Kudakwashe Mahachi were part of the Zambian team that came up against their club side Thatayaone Ditlhokwe of Botswana in Lusaka and Francistown.

“We will make a call on Friday on whether they are available for the Pirates match or not. With the exception of Dothlokwe‚ they have all returned back to the club but Thursday was not really about training because they travelled.

“They did a little bit of regeneration and we can only know on Friday how they are feeling. Dothlokwe is still in Botswana where he is observing Covid-19 protocols but I expect him to arrive in the country later today [Thursday] or tomorrow [Friday].”

Tembo also noted that his Pirates counterpart Josef Zinnbauer has a similar challenge as the Buccaneers had a number of players on national duty and it’s about who handles the situation better.

“This is an important match for us and we don’t want to focus on our previous results against Pirates because this is a different team. They are aggressive in their approach‚ you can see there is a lot of togetherness in the team and they have a very good work ethic.

“They have brought in a few good players and they are stable defensively and on the attack.

“We have started the season with promise but we need to be a little bit more consistent and stay with the top teams at the top. A good result against Pirates will help us in maintaining consistency.”

Tembo also said that defender Clayton Daniels will sit out of the match as he is recovering following a car accident.

“He is still out with injury‚ we are managing him because he couldn’t play against Celtic.”