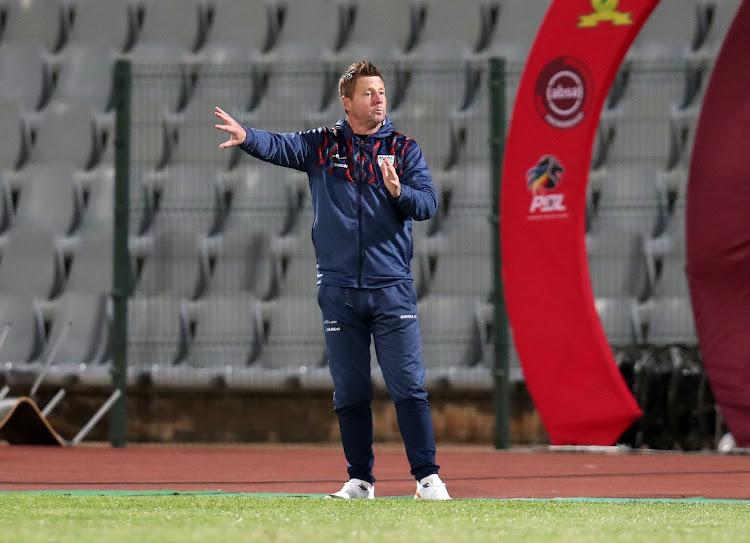 Dylan Kerr says he believes he can achieve something great with Baroka FC if he is given the space to do that and people at the club stop intefering with his responsibilities.
Image: Muzi Ntombela/BackpagePix

Dylan Kerr says he was getting ready to consult his lawyer on his dismissal from Baroka FC‚ to visit a friend in Durban‚ and then wait and see what coaching opportunities arose‚ when he got a call from Black Leopards on Monday.

Leopards on Monday became the first club to sack a coach in 2020-21 – Belgian Patrick Aussems‚ who had been introduced with much fanfare in a press conference at the Southern Sun Hyde Park on October 21 – after three DStv Premiership defeats.

The club apparently moved swiftly to approach Kerr‚ who previously coached Lidoda Duvha for seven months in the second half of the 2018-19 season‚ leaving in May 2019 because his mother was seriously ill.

Kerr was fired by Baroka FC – after guiding them to 14th place and survival on the final day of last season – having been suspended in early October after expressing anger at his management.

To then rejoin his previous team‚ who fired a coach after just three games‚ seems an almost bewildering pinball exhibition between Limpopo clubs from the 53-year-old former Arcadia Shepherds winger.

“I had a pre-season plan for Baroka‚” Kerr explained to TimesLIVE.

“We had four games to start in the province‚ and I fancied us against Maritzburg and fancied us against Leopards‚ because they had a longer season than we did because of the playoffs‚ had lost players and a new coach had come in.

“We were playing away against Arrows [then home against TTM]. So the first four games I was going for 12 points. And it was Pirates after that. And once you’ve got the momentum‚ it’s hard to defeat that.

“That was my pre-season plan. But unfortunately that was taken away from me by [Baroka] management. And upon that I was suspended. After a month I was charged‚ and I was found guilty ... and I was dismissed [last week].

“I planned on going to Johannesburg tomorrow [Thursday] to have a consultation with my lawyer‚ and then I was going to stay with a friend in Durban until a job became available or a club showed interest‚ whether in South Africa or abroad.

“ ... I didn’t initiate anything with Leopards or anybody – just got on with life and did all my planning just in case.

“ ... And I got a phone call on Monday morning from Chief [Thidiela‚ son of Leopards chairman David Thidiela]‚ with his father‚ saying they wanted to speak to me. And within five minutes I was watching training – David asked me to go and assess them.

“And when I came back from training I said‚ ‘Let me put an offer on the table‚ and we’ll go from there’. We agreed‚ and I started in charge of training today [Wednesday].”

The coach said that‚ given he left Leopards for personal reasons before‚ knowing the squad‚ players and management makes his return feel more like coming back to complete a job at the club he first joined in the PSL‚ from Kenya’s Gor Mahia in November 2018.

“I’m 24/7 with football. And I believe I’ve got something to offer South Africa in a different way‚” he said.

“But I don’t want that mandate. I want to challenge these players to get into the top eight. Even to finish 10th is an achievement and then we can build on that next year.”

Kerr’s first assignment is against Maritzburg United at Thohoyandou Stadium on Saturday.