Eva Nga throws down the gauntlet over the Golden Boot 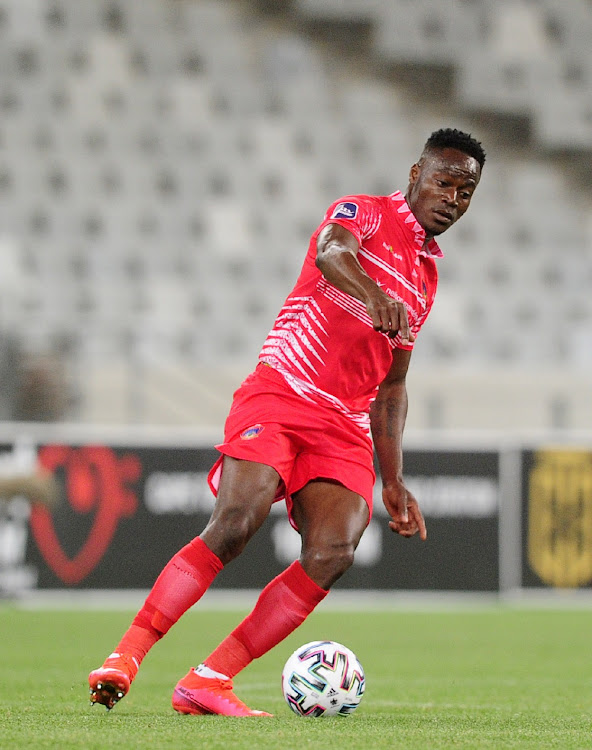 Scoring a hat-trick on his full debut for Chippa United has given striker Bienvenu Eva Nga hope that he can win the 2020/21 DStv Premiership Golden Boot.

Eva Nga, who joined Chippa in the aftermath of Bidvest Wits’ extinction, scored all the three goals as Chippa lambasted visiting Maritzburg United 3-1 on November 3. The goal-scoring form has effectively announced the Cameroonian's arrival in Port Elizabeth.

The sturdy striker arrived in SA midway through last season to link up with now defunct Wits from Mozambican side Costa do Sol.

“I can score many goals because I have so much belief in my abilities. I work very, very hard here at Chippa. Winning the Golden Boot is my main ambition and I strongly think I can win it,’’ he told Sowetan.

At first, the 27-year-old struggled to adapt to the SA league, going 11 matches before scoring his first goal in the PSL. The striker’s maiden goal in SA was a last-gasp strike that handed Wits a 1-0 victory over Kaizer Chiefs towards the end of last season in August.

Even today, Eva Nga still cherishes the goal that dented Amakhosi’s title hopes. He finished the season with just two goals, after netting his second as the Students beat now relegated Polokwane City 3-1 on the last day of the term.

“That goal [against Chiefs] changed many things in my life. Before that goal, I was always worried about my future in SA. My friends were always asking me why I wasn’t scoring,’’ Eva Nga recalled.

“That goal meant a world to me... people started to notice me more on the streets and my confidence was boosted after scoring it.’’

Eva Nga has attributed his slow start in the PSL to fatigue. "I didn’t rest prior to coming to SA. I played 38 games in Mozambique. I was so tired when I first came here [in SA].’’

Chippa United's next league match is away to Stellenbosch on Saturday.

Macheke puts in the work to be a 'modern fullback'

Truth be told, South African fullbacks are still miles behind in terms of adapting to what’s expected from modern wingbacks offensively.
Sport
11 months ago
Next Article