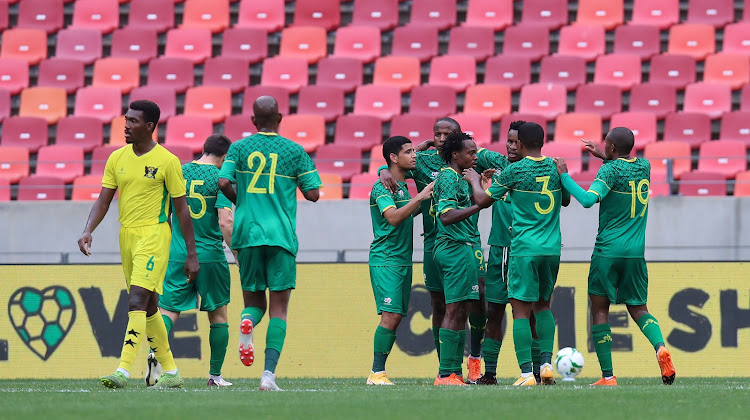 That South Africa were able to beat Sao Tome 4-2 in their African Cup of Nations 2022 qualifier was sufficient‚ but the manner in which the victory was achieved left a lot to be desired.

They trailed early‚ pulled into a deserved lead‚ gave it up‚ but scored two late goals to have some sort of cushion in what was a weird away game at an empty Nelson Mandela Bay Stadium in Port Elizabeth.

What the result masks was a patchy performance from a team that needs plenty of work and time to find the right starting combination.

That the goals were shared by Themba Zwane and Percy Tau spoke of a shared synergy and understanding of when to take opportunities.

They fluffed a few‚ but when the pressure was on to salvage the game‚ they came up with the goods to keep Bafana well in the qualification hunt in Group C.

That they became the first team in the group to concede goals against Sao Tome was embarrassing enough‚ but they’ve got nine points from four games with Ghana still having to play Sudan away on Tuesday.

Should Ghana win that game‚ they’ll leave Bafana with the simple task of needing one point from their last two games to qualify for Afcon 2022.

That should be straightforward by any stretch of the imagination‚ but this is Bafana Bafana.

They can’t be trusted‚ not even with a house in a safe neighbourhood.

At some point‚ Bafana needs to overcome their slow starts‚ or better teams will make them pay dearly.

There are also the defensive frailties at set-pieces that teams like Ghana and Sudan will exploit with even more ruthlessness than Sao Tome did.

Bafana‚ with all the experience and some decent talent at Molefi Ntseki’s disposal‚ remain a perpetual work in progress.

Whether they’ll get to some sort of cohesive functionality also remains to be seen.

The sad fact was that they didn’t start well‚ attacked reasonably in patches and defended poorly.

South Africa was dreadful in the first 10 minutes‚ with Sao Tome having two early opportunities.

They made a somnolent Bafana pay in the 12th minute when their captain Joazhifel Sousa Pontes nodded in Jardel Nazane’s corner.

They did have another opportunity in the 35th minute from Pontes from another Nazane corner‚ but South Africa had gradually taken control of the game.

By the time South Africa had equalised in the 39th minute through Zwane‚ who was on the receiving end of a lovely Dean Furman pass‚ it has been a case of when‚ not if they were going to score.

The early goal shocked them into action‚ with Lebogang Manyama‚ who had two chances in the 10th and 27th minutes‚ being a thorn despite his inaccuracy in front of goal.

If the short‚ but plucky Sao Tome Adaim Gamboa didn’t get in the way of a Thapelo Morena cross in the 44th minute‚ Manyama could have been in the hunt.

He should have scored in the 49th minute‚ but his casual shot from a Zwane cross bounced off the bar.

Bongani Zungu and Tau took turns in having a shots at goal (63rd minute) and a header go wide (64th minute)‚ but Tau finally gave SA the lead in the 70th minute when he rifled a shot past Gamboa.

That lead lasted all of five minutes as Harramiz Soares equalised for Sao Tome after connecting with Aderito Mata’s cross.

That equaliser left South Africa scrambling for a winning goal in what became a fraught last 10 minutes.

They drilled two in two minutes through Zwane and Tau to spare their blushes and live to fight another day.