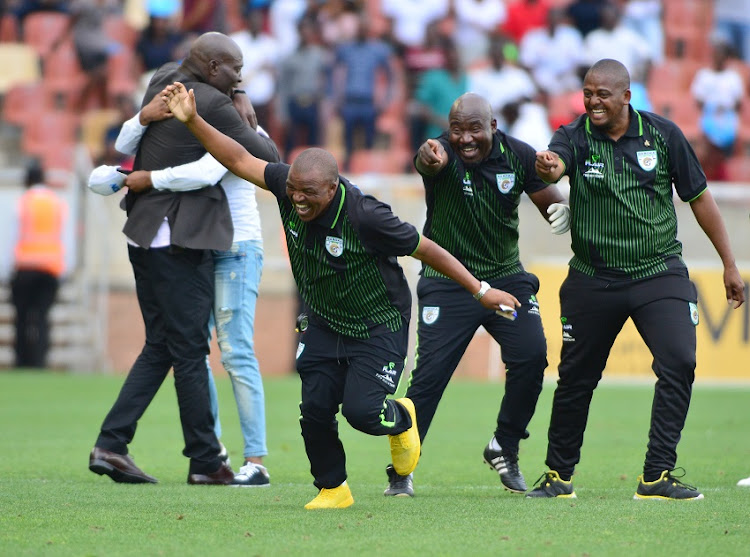 Baroka FC coach Thoka Matsimela has welcomed the “huge responsibility” of taking over the reigns at the club.

Baroka announced on Friday morning that they have parted ways with Dylan Kerr as head coach‚ who has been on suspension for the past few months.

The club confirmed that Matsimela will serve as head coach‚ having fulfilled a caretaker role so far in 2020-21.

“I know very well that it is a huge responsibility to coach Baroka FC in the DStv Premiership. It’s going to need sacrifice‚ a big heart and commitment because there are many challenges that we are going to face along the way‚” said Matsimela.

Matsimela‚ who has been with the club from their time in the third division‚ thanked chairman Khurishi Mphahlele for showing confidence in him to take charge of the team despite his lack of experience as a head coach.

“I have been around this club for a very long time and I have worked with many coaches as an assistant. This is my opportunity to be in charge and I am not afraid of taking the bull by its horns.

“I have been made the head coach and I will work together with the rest of the technical team to bring success to this club.”

Throughout the years as Baroka were promoted from the third division to the PSL‚ Matsimela worked as an assistant to coaches like Mike Rapatsa‚ Sello Chokoe‚ Kgoloko Thobejane‚ MacDonald Makhubedu‚ Wedson Nyirenda and Kerr.

“I have learned a lot from all the coaches that I served under as an assistant but I will add my own personal touch because I have my own philosophy‚” Matsimela said.

“Some of the important lessons that I learned from the coaches that I worked with is discipline‚ how to conduct yourself as a leader‚ human relations and behind the scenes technical stuff.

“I will also work according to the players that we have here at the club so that we can get the desired results. There is no time to celebrate this appointment‚ as the technical team we have must continue working hard with the players so that we are ready after the Fifa break.

“We start with a trip to Thohoyandou Stadium to take on Tshakhuma Tsha Madzivhandila (TTM) in the Limpopo derby. We must be ready to resume the season next week and maintain our momentum because matches will be coming in thick and fast.”

As caretaker-coach since the beginning of the season‚ Matsimela has led Baroka to second spot on the standings with seven points from two wins and one draw.