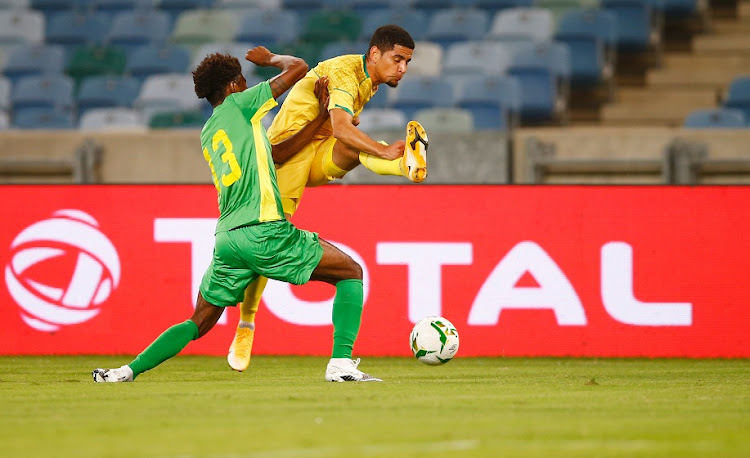 Keagan Dolly of Bafana Bafana has his shot blocked by Dilson Quaresma of Sao Tome and Príncipe in the 2021 Africa Cup of Nations qualifier at Moses Mabhida Stadium in Durban on November 13, 2020.
Image: Steve Haag/Gallo Images

Friday the 13th in a year as spectacularly pear-shaped as 2020 had all the ingredients to provide a horror show.

While Bafana Bafana had a few scares against Sao Tome and Principe at Moses Mabhida Stadium in their 2022 Africa Cup of Nations qualifier, a 2-0 win was enough to keep the South Africans on track for the rescheduled finals in Cameroon.

It might not have been an entirely dominant performance. But a strong combination put out by coach Molefi Ntseki did what was most important on the night, as they earned the three points, in the knowledge that if they do that again against the same opponents at Nelson Mandela Bay Stadium on Monday (3pm), Bafana will have a foot in the next Nations Cup.

A full-strength combination including European-based stars who had not played together in a year, contending with Covid-19 conditions of playing in front of an empty stadium, never hit heights against a pedestrian Sao Tome who nonetheless worked hard and were physical.

But Bafana did what was required to utilise their technical and tactical superiority effectively enough to ultimately control the 90 minutes, and get the win they needed.

Ntseki had out an XI with a balanced, strong appearance to it. Thapelo Morena and Innocent Maela were attacking fullbacks outside of the left and right-footed centrebacks Mosa Lebusa and Thulani Hlatshwayo.

Bafana's 2019 Nations Cup quarterfinal midfield combination of Dean Furman and Kamohelo Mokotjo would organise the centre, with Zungu left out to rest having arrived late from a 22-hour trip from Scotland. Wingers Keagan Dolly and Themba Zwane, and Lebogang Manyama and Tau up-front, promised much as a front line.

The South Africans looked structured, and had the play early on, as Zwane had space on the right to cross, Manyama unable to get over the header.

Sao Tome made up for lack of technical proficiency with hard work and fight. Bafana had to labour to pry chances. On the half-hour Tau's corner found the head, again, of Manyama, who lacked accuracy once more.

Going to the break goalless, Bafana would have felt they had not sufficiently utilised their technical superiority to establish a convincing dominance.

The South Aficans needed to up the tempo in the second half, and to get the breakthrough in front of goal. Tau seemed the most likely candidate to provide it.

On a run into the box the Anderlecht man was clattered down by centreback Jardel Nazane, and the referee pointed to the spot. Tau stepped up and slotted easily to the right of goalkeeper Aadim Gamboa.

Morena's cross found the head of Zwane to glance wide with Gamboa's goalmouth exposed. Then, just after Zungu replaced Mokotjo, Manyama slipped Dolly through to force a block from the Sao Tome keeper. Manyama's free-kick was headed sharply by Morena, forcing a save from Gamboa.

In the final minute of regulation time Zungu got up to Dolly's corner and headed Bafana's second.