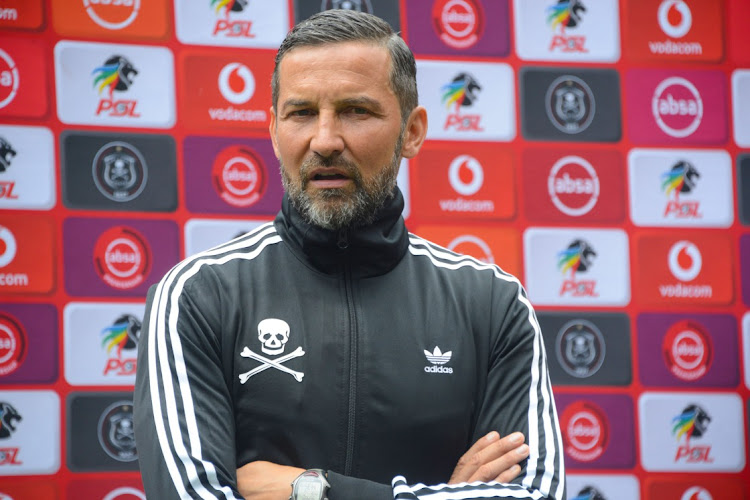 With the expectations heightening that Orlando Pirates can finally win their first trophy in six years, the club’s mentor Josef Zinnbauer has moved swiftly to remind the Buccaneers faithful they still have to dig deeper to ensure they bag the MTN8 trophy.

Sunday’s 2-0 win over traditional Soweto rivals Kaizer Chiefs, in the second leg of the of the MTN8 semifinals, earned Pirates a spot in the competition’s final.

The two goals, netted by Fortune Makaringe and Linda Mntambo in the second-half, propelled Bucs to a 5-0 aggregate win.

Advancing to the final, where they’ll play Bloemfontein Celtic on December 12, gives the Sea Robbers an opportunity to snap the trophy drought that’s been haunting them for six years now, having last won a trophy by the 2014 Nedbank Cup.

Disappointment was written all over Kaizer Chiefs coach Gavin Hunt’s face when he addressed the media, virtually, post their 0-2 defeat at home to ...
Sport
1 year ago

Nevertheless, Zinnbauer has calmed the expectations that it will be easy to win against Phunya Sele Sele.

“Our concentration is now on the [Fifa] break. We are happy we’re in the final and we know what Celtic can do… they are a quality team but we have enough time to find good focus for this game [the final],’’ said Zinnbauer.

“Success doesn’t come easy. We still have to work very hard to win this. We also have many other games coming up before the final.’’

The Bucs coach was  not expected to be in the dugout at the weekend, having left in a rush to see his ailing son immediately after the first leg. Zinnbauer felt remaining in Germany would not have helped as his son was still unconscious.

“The reason [ why he returned quickly] was [that] my son is still fighting for [his] life. At the moment he’s in a coma and I can do nothing for him at the moment. We have to see what happens in the next days. We pray for him,’’ stated Zinnbauer