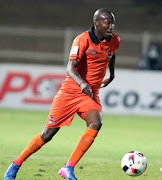 Image: ANTONIO MUCHAVE/SOWETAN. Jabu Maluleke has moved on to play for Sekhukhune United.

Veteran midfielder Jabulani Maluleke wants to use his experience to help Sekhukhune United win promotion to the DStv Premiership next season.

The 38-year-old joined Sekhukhune on a two-year deal after parting ways with Polokwane City, who were relegated at the end of last season.

Sekhukhune will be competing in the GladAfrica Championship following their purchase of Tshakhuma Tsha Madzivhandila (TTM) franchise in the second-tier, after the Venda-based club had bought premier league status of Bidvest Wits.

“I’m happy to be here. It is an honour and privilege to be in the team with a great ambition; we can go as far as winning the title,” Maluleka said.

“For us as players, we just have to do our work and win games and help the team win promotion.”

Maluleke, who captained Polokwane last season, added that he is happy to have joined the new Limpopo side in the lower division. Black Leopards were believed to be interested in him but nothing happened and he went to join Sekhukhune.

He insists he is not there to retire but to help the club win promotion.

“This is a new chapter of my life. The previous one, I have to forget about it. If you dwell on the past, your life will wait as well. I had to move on to seek greener pastures somewhere,” Maluleke said.

“The players have been working hard, and what we promise to supporters is that we will do our best to win as many games as we can and fight for our promotion.

“It was a difficult decision to join the Sekhukhune family. I have been here for two weeks now. Before, I was at home doing some other things, but it is a good decision I made, I believe.

“I’m proud to be a Limpopo-born boy. The province has been my heart and soul, so I’m happy. I didn’t want to leave the province, and that’s another reason I decided to join them.”