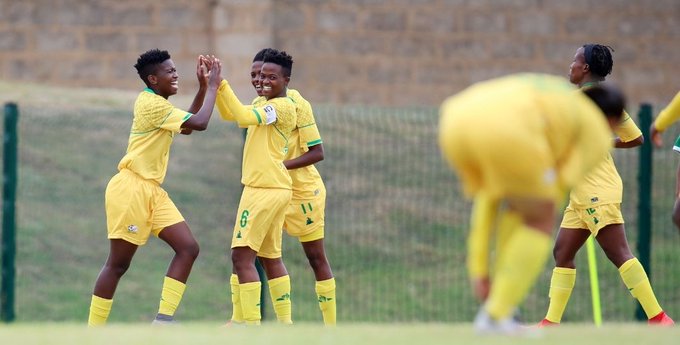 Sibulele Holweni produced a five-star performance as Banyana Banyana cruised through their final Cosafa Women's Championship Group A game with an emphatic 7-0 win over Comoros at the Isaac Wolfson stadium in Port Elizabeth on Monday.

Player of the match and KwaZakhele-born Holweni banged home all of five goals on her own as South Africa confirmed their spot in Thursday's semi-final against Malawi (3.30pm).

The other semi-final will be contested by Botswana and Zambia (12pm). Both matches will be played at Isaac Wolfson stadium.

While Holweni helped herself to rich pickings‚ Hildah Magaia and Mapula Kgode added the other goals to complete the rout.

Banyana finished on top of group A after winning all their group fixture in the competition.

The 5-0 win against Eswatini on Friday already saw Banyana through to the semi-finals but the victory on Monday cemented their position on the log as the group leaders.

In 2019 Banyana‚ on their way to a third tournament victory in a row‚ scored a record-breaking 17 goals against Comoros. The visitors were well-beaten in last year’s competition conceding a huge 35 goals in their three matches.

They scored 10 less this time around as the islanders showed a bit more character. Comoros earned their first ever point last week at the Cosafa Women’s Championship when they came from a goal down to draw 1-1 against Angola. But Banyana were a bridge too far.

The home team kept the ball on the ground playing into the wind in the first half and were rewarded with three goals.

Coach Desiree Ellis’s troops made their intentions known from the start.

Banyana fired threatening shots and it took only eight minutes for them to find the back of the net.

The 19-year-old‚ who has captained the U17 SA squad‚ scored her second goal in the 31st minute after Magaia's attempt was blocked by the Comoros goalkeeper.

Soon after Anllaouia Ali tried to pull one back for her side Comoros but her attempt went over the crossbar.

Magaia scored the third goal for the SA national senior women’s side after 41 minutes.

The second half saw Banyana play with the wind behind their backs.

Holweni beat the Comoros defeat to score her third goal of the game three minutes after the restart.

Soon after Mapula Kgoale also added her name to the scoresheet after scoring a long range free kick.