Hunt on struggling Chiefs star Billiat: 'He's got all my support‚ I'm right behind him' 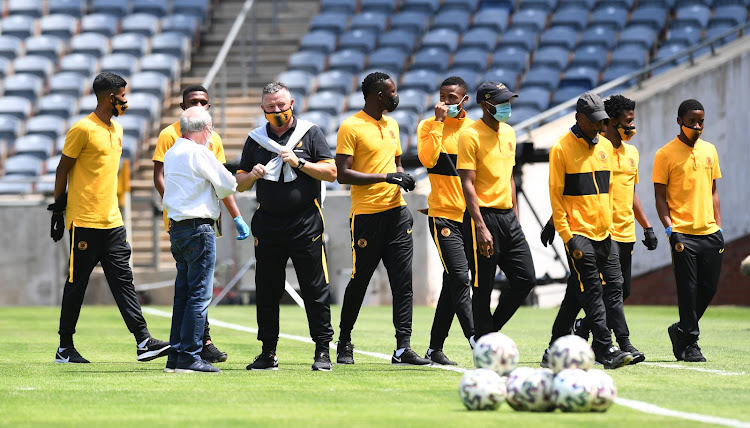 Khama Billiat needs to keep getting in the right areas‚ and to break the ice to rediscover his scoring touch‚ Kaizer Chiefs coach Gavin Hunt has has said of the frustrating inability of the little Zimbabwean to find the back of the net this season.

Chiefs have had goal problems in the absence of last season's top scorer Samir Nurkovic‚ as they go into Sunday's MTN8 semifinal second leg against Orlando Pirates at FNB Stadium needing an unlikely turnover of a 3-0 deficit from the first leg.

One of the causes has been that while Billiat‚ who scored just two league goals last season‚ has appeared to be making a greater effort in work-rate‚ he has spurned good chances.

"I think you've just got to get a little bit more work in on the training ground‚" Hunt said‚ asked how he can help the striker find his touch.

"I think when you're not scoring you've got to at least be creating‚ or trying to work harder for the team‚ and then goals will come.

"The most important thing is that the team must come first. And you've got to work harder. And he has worked harder here and there‚ but we need a bit more consistency.

"What we can't do at the moment‚ because of our situation [the Nurkovic injury]‚ is leave him out and give him a bit of a break.

"We've got to try and play him through this patch. Try and get him to be in the right areas and do the right things.

"But certainly‚ you can do all the talking you want - and we have spoken on numerous occasions to try and get him a bit more understanding of where to be when the ball is in certain areas - but it's got to be a bit about self-instinct as well. About wanting to do it.

"And sometimes the ball will come off your knee or your shin or your ankle‚ if you work harder. And those things happen and you just need to break the ice a bit.

"But certainly in the five games I've been here he's had some unbelievable chances‚ and he should have taken one or two by now. But as long as he keeps getting in those areas that's the most important.

"So‚ talking‚ showing‚ doing‚ the most important thing is to get out on the pitch and do it.

"He's got all my support‚ I'm right behind him‚ and he has to get through it‚ that's for sure."

Chiefs have had an indifferent start to 2020-21 under new coach Hunt. They beat Maritzburg United 1-0 in the MTN8 quarters‚ then in the DStv Premiership lost 3-0 to Mamelodi Sundowns and beat Chippa United 1-0 away.

They followed their first leg defeat to Pirates on Saturday with a 0-0 league draw against TS Galaxy on Tuesday.