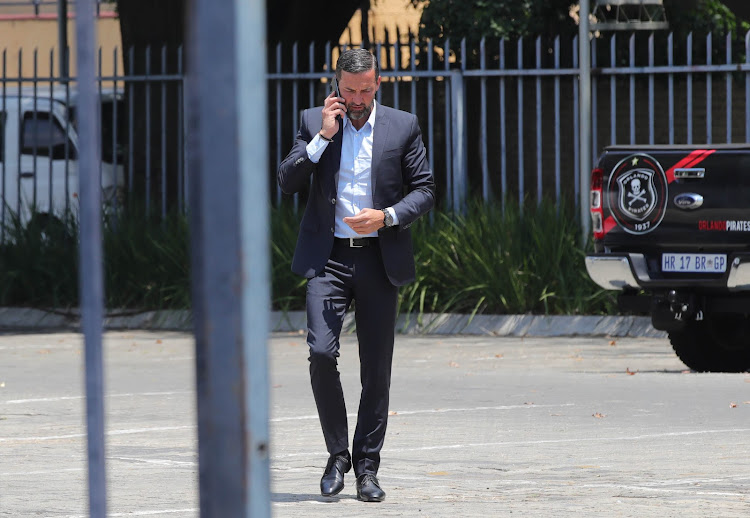 Orlando Pirates coach Josef Zinnbauer's son Fabio is reportedly fighting for his life in a German hospital and is in a comma after a horrific accident that happened on Münchener Strasse in Nuremberg on October 23.

German publication Bild published the pictures of a wrecked black Skoda Octavia station wagon under a truck that is believed to have left the 24-year-old Fabio in critical condition.

In their story‚ Bild said: “It is the son of Joe Zinnbauer (50). The ex-HSV coach (now in South Africa with Orlando Pirates) is very worried about Fabio. Fabio is seriously injured and is in a coma. The police are investigating. How it came to the horror crash at 1 p.m. has not yet been clarified.”

An image and English translation sent by a German colleague showing the scene of the accident involving the @orlandopirates Coach Jozef Zinnbauer's son Fabio who's in a coma receiving urgent medical attention.....Our thoughts and prayers are with the Family....🙏🏾🙏🏾

Zinnbauer was in charge of Pirates’ impressive 3-0 win over Kaizer Chiefs in an MTN8 semi-final first leg on Saturday but left immediately after that match to be with his son.

Pirates' statement at the weekend read: “Orlandopiratesfc.com can confirm that the club has granted the head coach leave to go home to Germany. Unfortunately‚ out of respect for Mr Zinnbauer and his family‚ we cannot divulge anything more except to say that his son is in hospital. The coach has requested for his family’s privacy to be respected during this difficult time. He will be back soon.”

Asked about his departure‚ Zinnbauer said: “Please understand that it's family and very‚ very close to me and the family. We will speak about it in the official [way] next. Sorry‚ I hope you understand it.”

Bild reporting that Pirates coach Jo Zinnbauer's 24 year old son, Fabio, is in a coma after a horror crash. He's fighting for his life and not sure if he will come out of the coma. Accident happened on the 23rd of October. Fabio plays in the lower leagues in Germany. 🙏🏿 pic.twitter.com/9VTXYF5CTP

The 50-year-old Zinnbauer arrived at Pirates in December 2019 to replace Milutin ‘Micho’ Sredojevic and helped the Buccaneers to a third place finish on the log after champions Mamelodi Sundowns and runner-up Kaizer Chiefs.