Erasmus remembers World Cup triumph: 'I will never forget the amazing welcome scenes at the airport' 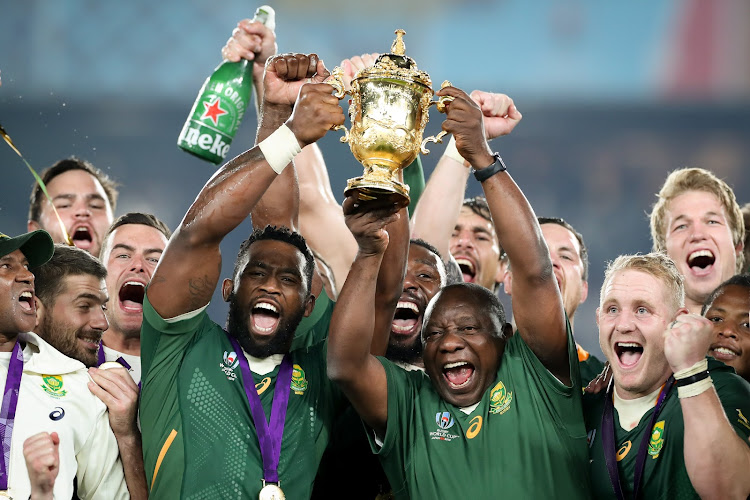 It's been exactly a year since Springbok captain Siya Kolisi hoisted the Webb-Ellis Cup above his head after South Africa crushed England 32-12 to win the coveted trophy in Tokyo in Japan last November.

It could have and should have been a catapult to greater things‚ but the spread of Covid-19 and the massive impact it has had on the greater game of rugby has meant that the Springboks haven’t played any Test rugby.

The rugby lay of the land has been altered so much by the pandemic that the Tri-Nations now consists of New Zealand‚ Australia and Argentina.

The memories of that night at the Nissan Stadium in Yokohama where tries by Makazole Mapimpi and Cheslin Kolbe‚ the first by the Springboks in three finals‚ still burn bright in director of rugby Rassie Erasmus’ mind.

He was the coach then but has been replaced by Jacques Nienaber.

“It’s astonishing‚ really. I will never forget the amazing welcome scenes at the airport‚ or the many thousands of people that came out to share in the team’s joy during the victory parades.

"One year later‚ people still say how they enjoyed the win and how proud they are of that achievement‚” Erasmus said.

“It was a full-on team effort‚ from players to coaches and management staff – they all worked incredibly hard and made many sacrifices to make that success a reality."

Versatile loose-forward Pieter-Steph du Toit‚ who ended up winning the World Rugby player of the award for his consistent performances‚ said it hasn’t always sunk in as to how unbelievable their crowning was.

In winning their third title in what has become an uncanny but legendary 12-year sequence after the 1995 and 2007 successes‚ the Springboks became the first team to win the Rugby World Cup despite losing a game.

They’d lost their World Cup opener 23-13 against New Zealand‚ but bounced back with wins against Namibia (57-3)‚ Italy (49-3) and Canada (66-7) while only conceding one try in those matches.

"When I was a kid all I was thinking about was when I was getting my next meal." 🇿🇦

They also conceded only one try in the three play-off games against Japan (26-3)‚ Wales (19-16) and England on their way to the Promised Land.

They also scored five tries in the process in what was a well-paced and executed mixture of defence and attack.

It was a team that had talent‚ but who’s moving parts came together at the most important time‚ even though there were flashes of form and results that meant South Africa could never be discounted.

I'm already having goosebumps at the prospect of watching these 2 warriors in Frontline of our defense of RWC🏆 in France 2023. 😍
Captain: Siya Kolisi 🌊🌊
Vice-Captain: Lukhanyo Am🦈🦈#ZijikileIzinto🇿🇦 #greenvgold 🏉#WhataTimetobeAlive 💃🏾🕺🏾 #RugbyisBack📺 #LocalisLekker pic.twitter.com/3g3WFHWKwI

Du Toit had been part of South Africa’s ups and downs since 2016‚ but winning the World Cup made up for the disappointments he’d experienced with the national team.

“Looking back‚ one year later‚ you now truly appreciate how unbelievable it was to be part of the Springbok team to play in Japan.

"To be able to play in the final and then win the Webb Ellis Cup was a dream come true‚ really‚” Du Toit said.

“The celebrations afterwards were special‚ and I was very lucky to have my wife and baby boy with me‚ so that made it extra special.

"The celebrations afterwards meant it was one of the best nights of my life.”