Sundowns held to a goalless draw at home against Tshakhuma 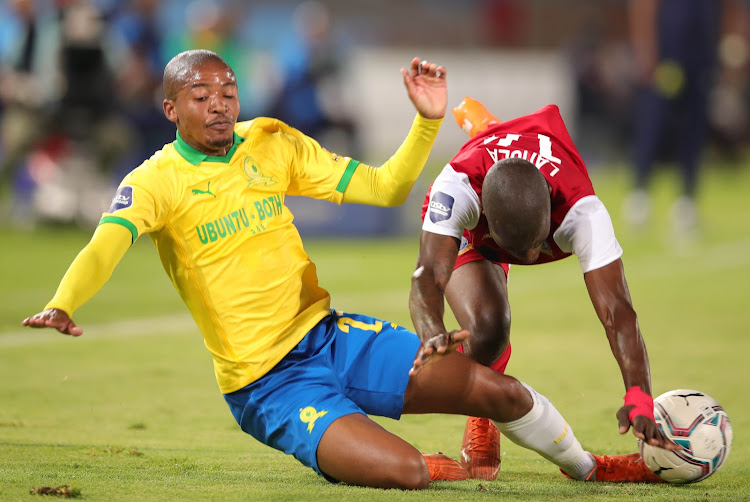 Mamelodi Sundowns utility player Thapelo Morena slides in with a challenge on Lerato Lamola during the match.
Image: Samuel Shivambu/BackpagePix

Mamelodi Sundowns were held to a goalless draw by Premiership newcomers Tshakhuma Tsha Madzivhandila (TTM) during their DStv Premiership encounter at Loftus on Wednesday night.

As a result of this uninspiring encounter where they shared the spoils, Sundowns remain in second spot on the log with four points while TTM have moved a few places to eleventh.

But, TTM are still looking for their first win in the paid ranks after they drew their opening league match of the season against fellow rookies TS Galaxy last weekend at home.

Both teams are off this weekend as they are not involved in the MTN8 semifinals programme and they will only return to action next Wednesday with Sundowns visiting Cape Town City and TTM hosting Swallows FC.

TTM were the first to threaten with attacker Justin Shonga forcing a brilliant diving save from Denis Onyango in the third minute after the Sundowns backline was caught napping in the danger area.

Sundowns got the wake-up call and launched an attack of their own which could have resulted in the opening goal after fourteen minutes but Hlompho Kekana forgot the basics of scoring.

With enough space inside the box, the Sundowns captain drilled his trademark powerful shot into the cross-bar with TTM ‘keeper Washinton Arubi after he intercepted a misplaced pass by defender Alfred Ndengane.

Sundowns kept on going forward and attacking with the likes of Peter Shalulile, Themba Zwane and Siphelele Mkhulise but the TTM defence of Ndengane, Diamond Thopola and skipper Lehlohonolo Nonyane stood firm.

It was not all about the Brazilians as TTM also had notable moments on the attack mostly through Shonga, Mogakolodi Ngele, the tricky Celimpilo Ngema and Miguel Timm mostly in the second half.

To try and find another way of penetrating the TTM defence, the Sundowns’ technical team introduced Keletso Makgalwa for Mkhulise, George Maluleka for Kekana and Tebogo Langerman for Lyle Lakay in the second half.

Makgalwa did not last long in the game as he was replaced by Lebohang Maboe after he sustained an injury but both teams had to settle for a draw without goals which was definitely welcomed by TTM.