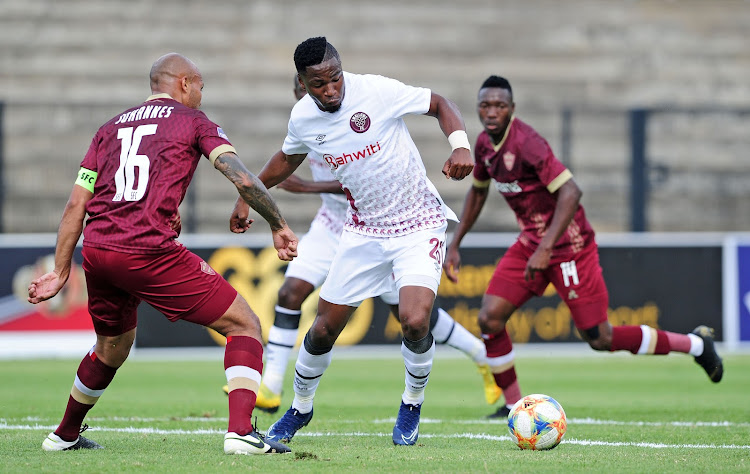 The return of those familiar maroon and white colours on South African football's highest level on the club stage will have pleased even their staunchest rivals as Swallows FC took to the field to face Stellenbosch FC in a league match at the Danie Craven Stadium on Sunday afternoon.

It may not have been the Moroka Swallows of old but this reincarnation of the Birds will have pleased even the neutrals as coach Brandon Truter's charges trooped onto the pitch to play their first match since they won promotion to the topflight a few weeks ago.

Swallows gave a gallant account of themselves on their first day in the DStv Premiership but in the end‚ the Soweto side was happy to settle for a share of the spoils as they played to a 1-1 draw with their Western Cape hosts.

The visitors were the first to get their name up on the scoreboard after confusion in the back between Robyn Johannes and goalkeeper Lee Langeveldt led to a penalty after a foul on Zaphaniah Mbokoma in the 16th minute.

Ruzaigh Gamildien stepped up to the penalty spot and beat Langeveldt with a low shot that put the Premiership newcomers in the lead.

But Stellenbosch managed to draw level in the 27th minute after Lelethu Skelem duped referee Kwinda Olani into believing that he was fouled in the area.

Skelem rolled on the pitch as if he had been hit by the Gautrain at full speed when Swallows goalkeeper Virgil Vries never touched him.

But that opportunity was enough for the home side to take advantage and Johannes made up for the earlier blunder when he beat Swallows goalkeeper Vries to score the equaliser.

Truter admitted that the draw was a fair reflection of the encounter and was happy to walk away with a point away from home in their first match in the topfight.

"Jah it's a fair result‚" he said in his post-match television interview.

"We made a mistake in the back while we forced a mistake on the other side‚ and that's the game.

"Jah‚ the preparation‚ the conditioning‚ we still need a bit of time and I think we will get better as we go along."

Swallows are at home to Bloemfontein Celtic at Dobsonville Stadium in their next match on Wednesday while Stellenbosch are away to Orlando Pirates at Orlando on the same day.