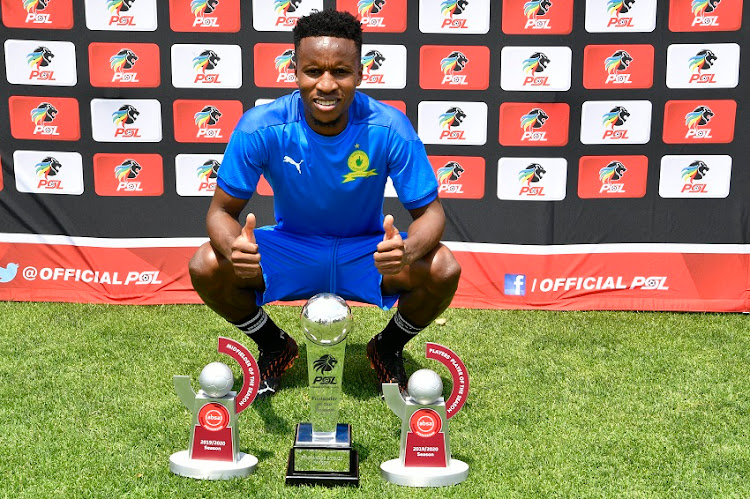 Footballer of the year Themba Zwane has said all three of his prizes swept up at Thursday night’s 2019-20 Premier Soccer League (PSL) Awards are special‚ as they have been the personal trophies he has yearned for.

Zwane became the next Mamelodi Sundowns player in a production line that runs from Khama Billiat in 2015-16 to Percy Tau in 2017-18‚ to have made a sweep of awards at the league’s end-of-season prizegiving.

The 31-year-old has always been there and thereabouts for the awards he won on Thursday – also picking up the 2019-20 Absa Premiership midfielder of the season and coveted player’s player of the season prizes – in strong Sundowns teams.

Footballer of the year came as just reward for on of the PSL’s great entertainers of the last 10 years having been influential in all Downs’ trophies of their treble-winning season where they lifted the Telkom Knockout‚ Nedbank Cup and Premiership.

"Mshishi" said finally being the player given the trophies was special for him.

“All [three] of them are special‚ because it’s the first time I’m getting them. These are the awards that I was looking forward to getting all these seasons‚” the skilful left-footed Sundowns match-winner said.

“Obviously I was happy‚ and I would like to thank the people who voted for me. I really appreciate it.

“And I want to thank my family‚ my teammates‚ my other professional family‚ my agent Jazzman [Mahlakgane]‚ and the whole Sundowns family.

“It means a lot. It shows I’m doing good things on the field and that the coaches appreciate it.”

Zwane is another – along with Billiat and Tau – whose skills and raw potential were refined at Sundowns under former coach Pitso Mosimane into the class of an award-winner.

Middendorp steered 2018-19’s ninth-placed finishers Chiefs to runners-up‚ being pipped by Sundowns to the title on the final day having led for almost all of the campaign.

“For coach Pitso‚ I would like to say thanks for everything that he has done for us as a team‚ and we wish him the best for his new challenge‚” Zwane said.

“And for the coaches who we have now‚ obviously we are willing to work hard and try to get them what they want from us as a team‚ so that we can win and achieve as a team.”

Mosimane has been replaced by the trio of his former assistants Manqoba Mngqithi and Rulani Mokwena‚ plus former Arrows boss Steve Komphela‚ at the helm of Downs.