Komphela’s successor Ncikazi has mixed emotions taking over at Arrows 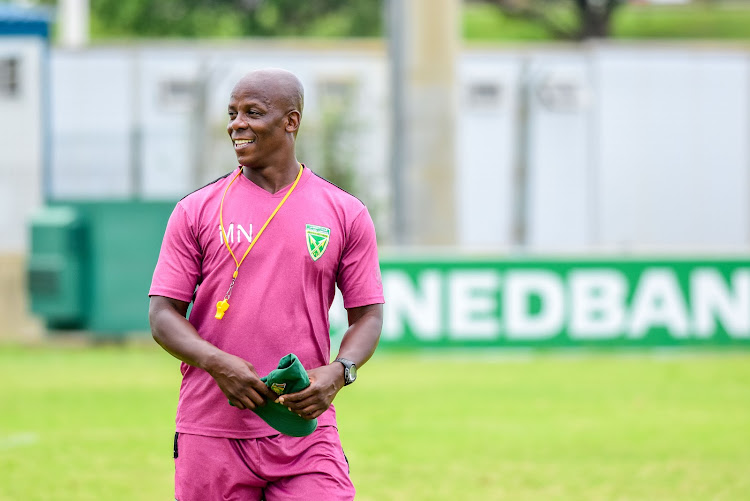 Mandla Ncikazi has been given his first opportunity as a head coach in the Premier Soccer League.
Image: Darren Stewart/Gallo Images

Mandla Ncikazi spent 75 forgettable days as head coach of Maritzburg United at the beginning of the 2014-15 season.

In those days Ncikazi’s team lost three league matches and drew one‚ having already failed to win his first ever game – a 5-3 drubbing by Kaizer Chiefs in MTN8 quarterfinal.

As Ncikazi begins his new life as the head coach of Golden Arrows‚ his second time holding that title after a number years working as an assistant for a variety of teams and coaches in the Premier Soccer League‚ he doesn’t want to dwell on what happened at Maritzburg.

The coach’s first assignment is in Arrows’ DStv Premiership season-opener against Bloemfontein Celtic at Dr Petrus Molemela Stadium on Saturday.

“If I was to go back to the time I was at Maritzburg as a head coach and say I must complain‚ I have got reasons to complain but nobody will be prepared to listen to that. So you just have to accept that it didn’t work out‚” said the 51-year-old Ncikazi as he switches focus to taking the reins from Steve Komphela‚ who left Abafana Be’sthende to join Mamelodi Sundowns last week.

“I’m okay with the current technical team at Arrows. Mabhudi [Khenyeza‚ his assistant] has got a lot history with the club.

“He played there and in the few days we’ve worked together we seem to be doing things the right way and we respect each other.

“Coach ‘Kanu’ [Vusimuzi Vilakazi] is also around and we value his contribution. The goalkeeper-coach [Majdi Mnsaira] – a total professional from Tunisia‚ has been here for quite some time.

“The fitness coach from Brazil [Pedro Picarro] has been here long enough‚ so I’m happy with the group that’s around me and I have no complaints.”

Arrows‚ a club that relies heavily on unearthing players from the amateur ranks‚ has been affected in its scouting by the outbreak of Covid-19 as there’s been no football in the lower divisions due to the lockdown restrictions.

“We are a few days now before our first match against Bloemfontein Celtic – the same Celtic that beat us 5-0 away in the first round last season‚” Ncikazi said.

“Unfortunately the bio-bubble has made it very difficult for us to prepare‚ especially for teams like Golden Arrows that rely on young players – players who we recruit from afar.

“There’s been no [amateur] football that’s been taking place anywhere. We’re all forced to buy in one shop when previously we had a way of going to the other shops and get things cheaper.

“But one doesn’t want to make excuses. I’m excited at the opportunity that I have been given‚ but it’s with caution.

“It’s a lot of responsibility because I’m entrusted with improving the brand of Golden Arrows‚ fulfilling the expectations of a lot of our loyal supporters.

“So it’s mixed emotions… excited but with caution.”