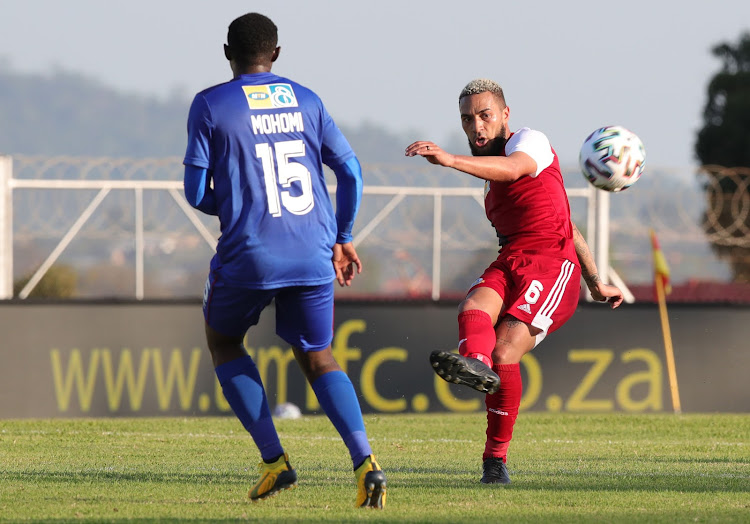 Lucky Mohomi came off the bench early in the second half to make his debut for SuperSport United during a 3-2 MTN8 quarterfinal win over TTM.
Image: Samuel Shivambu/BackpagePix

Lucky Mohomi spent most of his time at Mamelodi Sundowns watching from the sidelines and current employers Supersport United are desperate to see their new signing regain his form of old.

The 29-yeard Mohomi only played 32 matches in the three years he was at Sundowns and while he won three league titles and a couple of domestic trophies during his time at Chloorkop‚ he never managed to find the back of the net.

United coach Kaitano Tembo said he saw glimpses of the old Mohomi when he handed him 44 minutes on the pitch against Tshakhuma Tsha Madzivhandila (TTM) in an MTN8 quarterfinal on Saturday and hopes to help the player regain the crispy form he displayed at Free State Stars before joining Sundowns.

"We're just lucky enough that we've got Lucky at this point. He has had two weeks with us in terms of pre-season‚" said Tembo.

"So that's been very key for us because I know he was in a very difficult state of mind‚ he wasn't playing.

"Training when you know you're not going to play is always stressful for any player. He was in that state of mind and I had to sit down and speak with him.

"We must make sure that we help him‚ and we're committed.

"We know what kind of a player he is‚ he's a technical player and he still needs a lot of work in terms of his fitness‚ which is normal."

Tembo said the midfielder has worked very hard in the short time he's been at United and the coach is encouraged by the player's commitment to repaying the faith shown in him.

"What has been very encouraging for me is his attitude towards training. It also boils down to the player‚" Tembo said.

"I think we trained for just two to three weeks and the commitment was fantastic because that's what we look at.

"He's been working very hard and I will give him two to three weeks and probably we'll start seeing a different Mohomi‚ you know‚ from the one we've seen before.

"For me I always look back before he joined Sundowns - what kind of a player was he?

"I think he's a player who's got goals in him and when he was signed by Sundowns he had scored about six goals from midfield [during his time] at Free State Stars.

"Good work ethic… and that's a player we're also trying to get and I've seen glimpses. We just need to get him fired up and I think he'll be a very important player for us."

Mohomi is one of the few players that Tembo has added to his team for the 2020-21 campaign.

The other others are former Stellenbosch FC striker Iqraam Rayners‚ who scored on his debut in United's 3-2 win against TTM in a MTN8 quarterfinal tie last Saturday‚ ex-Polokwane City goalkeeper George Chigova and two youngsters from the now defunct Bidvest Wits‚ Mpho Mathebula and Keenan Phillips.

The 24-year-old Rayners has already proven his worth and Tembo is pleased.

"I was a little bit worried about his fitness because he was not part of the bubble (with Stellenbosch)‚" said Tembo.

"I'm very impressed with what I'd seen at training and I think we got him for the sole idea of improving our attack.

"He's very quick and he can play anywhere in our front three. That's an added advantage for him.

"It was also evident with the goal he scored against TTM‚ and that's the player we're trying to recreate. The one we saw when he played a huge role in helping Stellenbosch to be promoted to the Premiership.

"On Saturday he showed glimpses of that‚ but I feel there's still more to come from him."

United open their account against Black Leopards on Saturday night.