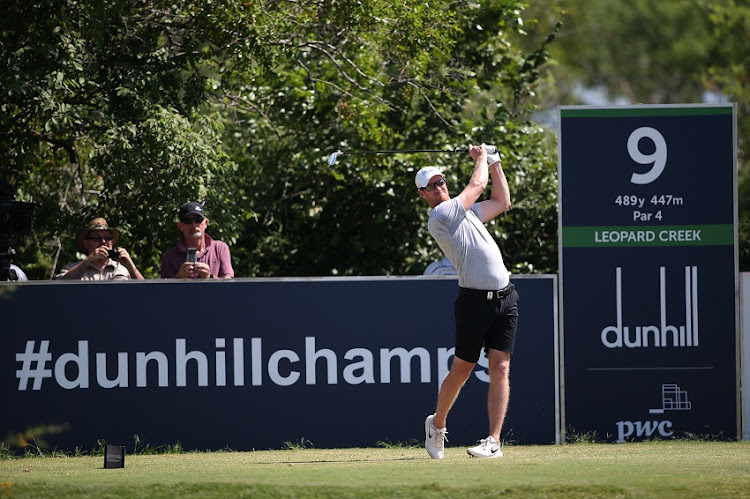 Wil Besseling of the Netherlands tees off on the 9th during day 4 of the 2019 Alfred Dunhill Championship at Leopard Creek Country Club on December 01, 2019 in Malelane, South Africa.
Image: Shaun Roy/Sunshine Tour/Gallo Images

Professional golf in this country is flickering back to life and the latest spark is the announcement that the 2020 Alfred Dunhill Championship will be contested for a record prize pot of R29 million.

Earlier this week the Sunshine Tour announced the return of the Joburg Open from 19-22 November and a week later the pro's will turn their attention to Leopard Creek for an even bigger purse.

The 2020 Alfred Dunhill Championship will anchor a strong run of co-sanctioned tournaments in South Africa at the end of this year by offering the biggest purse on the Sunshine Tour this season.

The tournament forms part of the Sunshine Tour’s international restart of its schedule‚ and it will be played according to the strict Covid-19 health protocols of both the South African Government as well as the European Tour.

The event which is annually contested at one of the most unique golf settings has proved popular with professionals.

The course may have great vistas of the banks of the Crocodile River and the adjacent Kruger National Park but it is a true test of endurance as it is contested in suffocating heat.

Some big names have stayed the course.

Since its inception in 2000‚ the list of past champions has included Major Champions and former world No.1s Adam Scott‚ Justin Rose‚ Charl Schwartzel and Ernie Els. The current champion is Pablo Larrazabal‚ who kept going last year despite foot problems to win by one shot in an exciting finish.

“The Alfred Dunhill Championship is one of our flagship tournaments and we are extremely grateful to be able to announce it as part of our schedule‚ and with such a significant increase in prize money‚” said Thomas Abt‚ commissioner of the Sunshine Tour.

As will be the case a week earlier at the Joburg Open‚ no spectators will be allowed onto the picturesque course.

“In our 21st year‚ we are delighted that we can stage the Alfred Dunhill Championship. We are sorry that we cannot welcome spectators‚ but we are sure golf fans will understand‚” said Guy Sanan‚ of Richemont‚ the sponsor of the event.