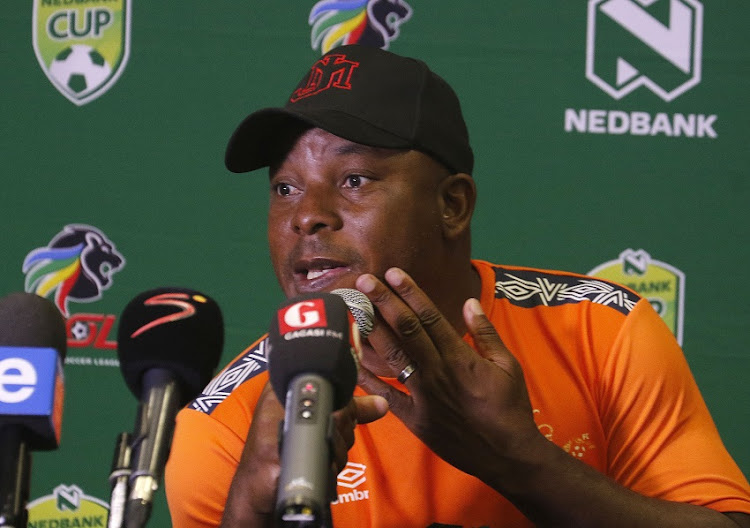 Tshakhuma Tsha Madzivhandila (TTM) technical director Joel Masutha will be barking instructions on the touchline when the premiership newcomers face SuperSport United in an MTN8 quarterfinal match at Thohoyandou Stadium on Saturday.

Masutha will share the responsibilities with Lucky Nelukau and the other members of the technical team who were in charge during the PSL's bio-bubble and promotional play-offs.

“I know you are not sure of the title that I am holding right now‚ I am the technical director of TTM‚” he said on Tuesday as the club prepared for their first official match in the paid ranks.

“For this match‚ I will be sitting on the bench with other technical team members. If you remember‚ there are people who were working here at the club when the team was finishing the league in the bubble and during the play-offs. Those people are still here and we are going to help each other until there are any new developments with regards to a coach.

“As you know that I have history with TTM‚ when the team started I was there as a general manager. So‚ the relationship never stopped‚ even when the status of Bidvest Wits was acquired‚ we were talking all along. I was appointed last week as the technical director.”

TTM’s preparations for the season have been rocked by delays in the registration of players‚ the failure to appoint a coach just days before the start of the campaign and not having enough time to prepare.

But Masutha insisted that they would be ready when the season gets underway.

“Things are going on well for us despite the fact that we didn’t have enough days of preparation. We don’t want to use that as an excuse as the technical team and the players.

"We won’t even complain after the match and say it’s because of this or that. We are ready and we can’t wait to face SuperSport United.

"We are going to face a strong team who are also defending champions‚ but we are excited to test ourselves and our strengths against them. I think this match came at the right time for us.

“There have been players coming here for trials and a few managed to make it. You are raising a very good point when you say it is unsettling when you are preparing and signing players at the same time.

"But‚ we looked at the players who were in the bubble because they are still okay in terms of fitness. We will look at that and also the positions that need strengthening and the players who fit the way we want the team to play.”

Masutha said former Bafana Bafana midfielder Oupa Manyisa is with the team but could not give an indication if he is available for selection.