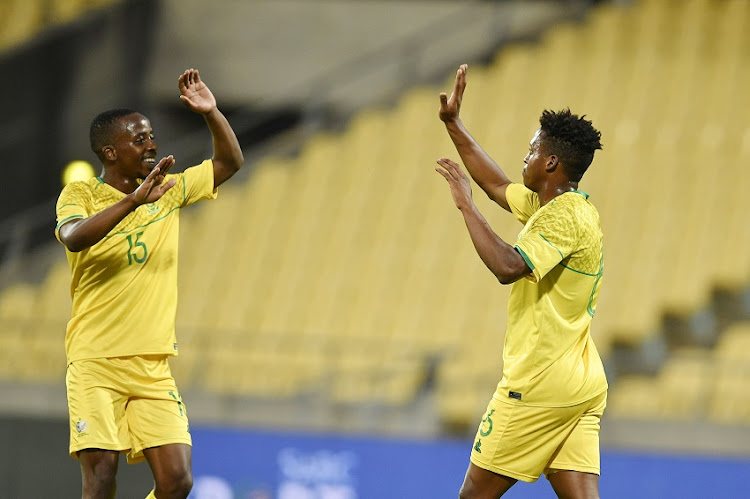 Siyethemba Sithebe‚ Thibang Phete and Thabo Nodada were given debuts in Bafana Bafana’s 1-1 drawn friendly against Namibia at Royal Bafokeng Sports Palace on Thursday‚ but it was only Nodada who finished the match.

The Cape Town City midfielder caught the eye and looks set to get another run against Zambia in the second friendly at the same venue on Sunday.

Sithebe‚ the AmaZulu FC left-footed midfielder who was brought in to replace the injured Sipho Mbule‚ had a few promising touches in the early stages of the game but‚ like a couple of other Bafana players‚ had faded by the time was pulled off in the second half.

The Portuguese-based Phete looked impressive playing alongside Mosa Lebusa in central defence though it might have been his positioning as Namibia equalised 10 minutes after the restart that exposed him and resulted in him not finishing the match.

Otherwise the lanky defender‚ born in Kimberley‚ had a good game and offered a lot of support in Bafana’s set pieces while his long range distribution of the ball was not too bad either.

It was Nodada’s performance‚ though‚ that made an impression. The City utility midfielder was not afraid to put his body on the line when trying to block the danger and had some nice touches going forward even though at times‚ having cooked his passes a bit more‚ his distribution missed the intended recipient.

Commenting on his debutants‚ Bafana coach Molefi Ntseki complemented their performance in what he sais was an intense match.

“Overall I think they did well‚” was Ntseki’s assessment of the trio.

“We were there to support them‚ there to push them and to make them believe that they can make a permanent feature in the national team.”

Ntseki added that the match against Namibia did help in sensitising‚ not just the debutants‚ but the whole team about the dangers they could face when they meet islanders Sao Tome an Principe in the two home and away 2021 Africa Cup of Nations qualifiers next month.

“I think if you look at Namibia‚ with due respect‚ not highly technical. But they play with big hearts‚ play with enthusiasm and they’re highly physical‚” the coach said.

“So it is something that we’re fully aware of going into Sao Tome. That’s why we felt playing against Namibia will definitely help us.

“But I think the lessons coming from this match will definitely help us‚ especially when it comes to how we manage the game under the physical conditions that we’re in.”