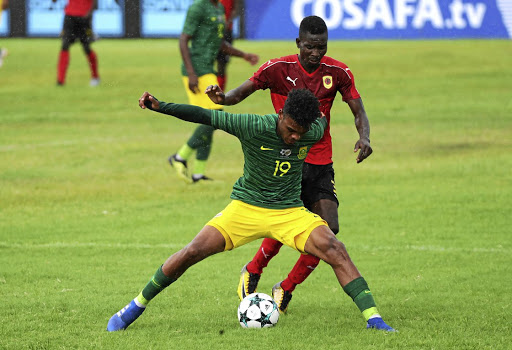 Lyle Foster of SA will be key as the U23s take on Angola tonight.
Image: Chris Ricco/BackpagePix

Young striker Lyle Foster is still pinching himself as he attempts to grow accustomed to sharing the Bafana Bafana change room with players he grew up idolising.

The 20-year-old Foster was a late call up to the Bafana squad to play two international friendlies against Namibia and Zambia this week after Kurt Abrahams, another young SA striker based in Belgium, pulled out of the team.

“It’s a big honour for me to be here,” said Foster.

“Seeing these faces that I grew up watching and now calling them teammates, is a dream come true. But jah, I’m happy to be here and the hard work starts now.”

Bafana host Namibia in the first outing at Rustenburg's Royal Bafokeng Palace on Thursday night and then return to the same venue to face the Zambians on Sunday.

The two matches will serve as coach Molefi Ntseki's preparations for the back-to-back 2021 Africa Cup of Nations qualifiers against islanders Sao Tome & Principe on November 9-17.

Foster moved back to Portugal to join Vitoria Guimaraes SC in August after failing to impress at French club AS Monaco last season.

The former Orlando Pirates marksman arrived from Portugal late on Tuesday and travelled to Rustenburg to join his team-mates in time for Wednesday's training session.

Foster, a star of the SA under-23 side that qualified for the postponed 2020 Tokyo Olympics Games, said the trip home took him from Portugal to Amsterdam and then finally to Johannesburg.

He is expected to fight for a starting berth with the likes of Kermit Erasmus, Lebohang Manyama and his under-23 striking partner Luther Singh.

“I’ve settled well in my new club and my new environment," said Foster.

"Training and games have been going well. I think the difficulties with the Covid-19 is everywhere in the world.

“But ja, we’re trying to stay strong and just do what’s most important, which is playing football.”

Foster has featured in only one of his team’s first three league matches in the Portuguese top league this season and was on the bench in the last two games. He will have to do a lot to impress Ntseki.

Like all the strikers in the team, Foster will be to do enough to convince the Bafana coach to consider him when he names his squad for the coming Afcon qualifiers.

Ntseki said bringing under-23 players into the Bafana setup was part of a plan to ensure that they are ready to be part of the team that will represent SA at the 2021 Africa Cup of Nations in Cameroon. They will also form part of the squad that will fight for one of the five places available for the African continent at the 2022 Fifa World Cup in Qatar.

Bafana will resume the 2021 Afcon qualification with the two matches against islanders Sao Tome & Principe next month. The World Cup qualifiers will begin in May next year.

The South Africans have played against the Namibians 10 times and won seven outings, including the last outing in the first round of the 2019 Afcon in Egypt where then Bafana coach Stuart Baxter’s team was eventually knocked out by Nigeria in the quarterfinals.