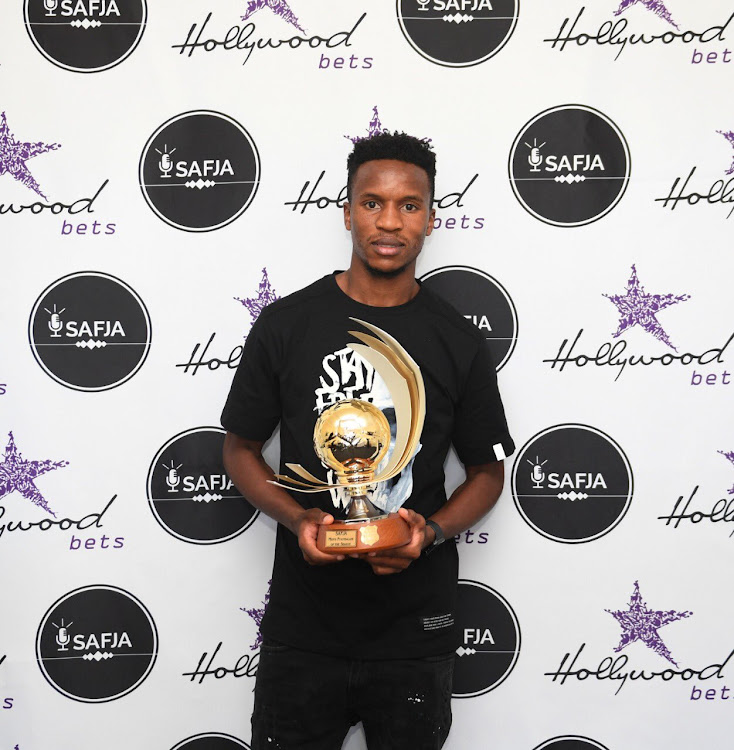 Mamelodi Sundowns midfielder Themba Zwane was crowned the inaugural SAFJA Men’s Footballer of the Season for his showing in the 2019/20 domestic and continental campaigns.
Image: TWITTER/SAFJA

Themba Zwane revealed that he will vote for Lebogang Manyama for the Premier Soccer League (PSL) Players' Player of the Season award.

The PSL are yet to announce the nominees for this year’s awards but Zwane said Manyama’s performance at Chiefs must also be recognised.

“To be honest I will vote for Lebo Manyama. He has done well for Chiefs by creating and scoring crucial goals for them,” Zwane told Safja.

Manyama ended the season with the most assists (nine) and scored six goals for Amakhosi.

“He was making Chiefs play. He had a lot of energy, good passing and he is improving every game. So I will vote for him.”

Zwane had his ups and downs during the season but came good in Sundowns dramatic run to the third title in a row. He scored an impressive 11 goals and provided countless assists to his fellow attackers (seven).

Our PSL team of the season

Following the conclusion of what was the longest Premier Soccer League (PSL) season ever, prolonged by the coronavirus outbreak, Sihle Ndebele and ...
Sport
1 year ago

“It feels good to see people recognise the good job you are doing on the field. It makes me happy,” the Tembisa-born Zwane said.

“The amount of work I did was long before the bio-bubble because I scored a lot of goals and coming into the bubble I played a crucial role in my team [winning the league and Nedbank Cup]. That’s my job to do well for the team and try to create more goals and to score.”

One of the games Zwane was instrumental  was in their 1-0 win over Chiefs in the bubble at Orlando Stadium on August 27 where he pulled the Brazilians level with then log-leaders.

He said they had the belief that they would win the league after they defeated relegated Polokwane City 3-0 at Loftus Versfeld earlier this month.

“When we beat Polokwane City we told ourselves that we are going to win the league because we knew that against Black Leopards [final match] we would go all out. If you checked that game, we created a lot of chances and scored three goals.

“We told ourselves that we don’t need to focus on what Chiefs were doing. If we score more goals we win the league it doesn’t matter what happens on the other side.”