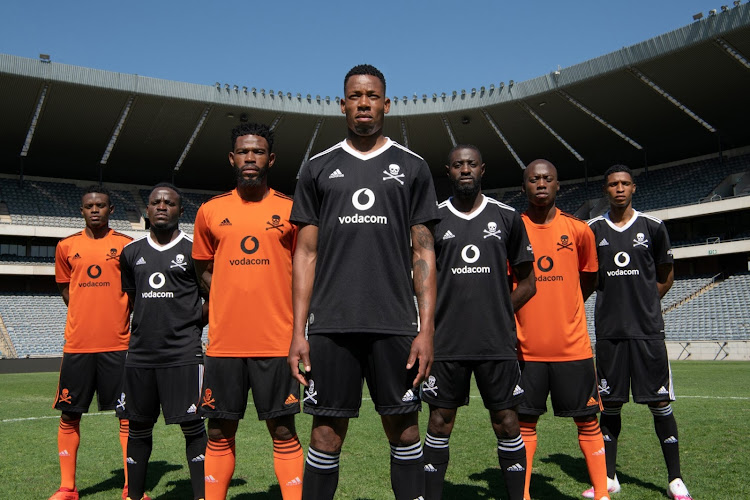 Orlando Pirates have released images of their bold new home and away kits‚ which strikingly replace the Soweto giants’ traditional logo with a retro skull and crossbones emblem.

Bucs’ two kits for the 2020-21 season have already drawn much reaction on social media‚ and especially the use of the colour orange for the first time for the away jersey.

Describing the new kits in a press statement‚ the club said: “Orlando Pirates and adidas have unveiled the Club’s home and away kit for the 2020-21 season‚ with both jerseys getting a bold and modern update.

“One of the big changes this season is that the club’s traditional badge has been replaced with the skull and crossbones emblem on both jerseys.

“The away kit in particular is sure to get fans talking‚ with its striking orange colour.

"It’s the first time in the club’s history this colour is being used‚ and it’s seen as an expression of confidence and vibrance that reflects the team’s spirit.

“The new kit stays true to Pirates’ iconic black and white colours‚ with the home jersey in all black‚ with white stripes on the shoulder and a white v-neck.

“The bold orange of the away jersey is finished off with the classic three black adidas stripes on the shoulders.

The statement continued: “The new Orlando Pirates kit will be available for pre-ordering from September 29‚ online at piratesshop.co.za and for sale from October 8 at adidas.co.za‚ adidas concept stores and at selected sports retailers across the country at a retail price of R799.”

Pirates finished a strong third on the Absa Premiership under German coach Josef Zinnbauer‚ who arrived in December‚ after a poor first half of the season.

Bucs will aim to challenge for their first silverware since the 2014 Nedbank Cup when the 2020-21 season kicks off next month.