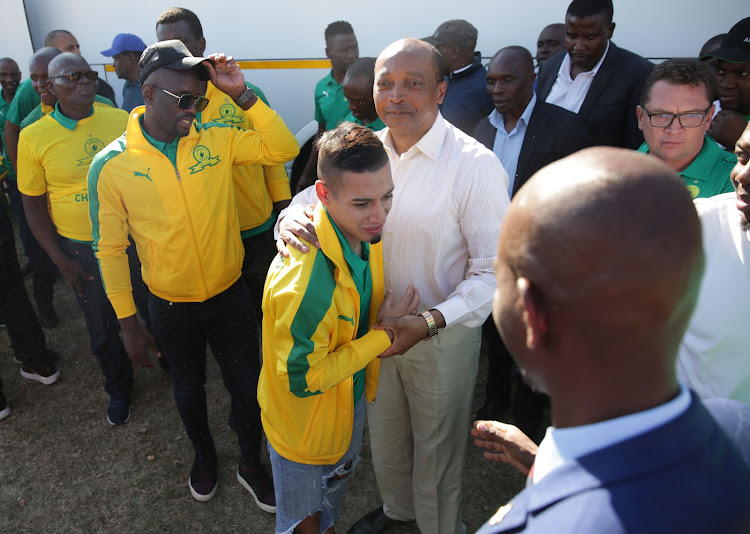 Mamelodi Sundowns billionaire owner-president Patrice Motsepe has said he takes responsibility as the president of the club whether he knew or not and whether he was involved or not.
Image: Samuel Shivambu/BackpagePix

Mamelodi Sundowns president Dr Patrice Motsepe has apologised and promised action for the ‘grossly negligent’ behavior that led to suspended defender Tebogo Langerman named among the substitutes during their Nedbank Cup final.

The Brazilians beat Bloemfontein Celtic 1-0 but their feat of winning a league title‚ Telkom Knockout and Nedbank Cup titles on the same season was spoiled by news that Siwelele lodged an official complaint regarding Langerman.

Last week‚ Celtic lost their protest at arbitration against Sundowns who pleaded guilty and they face a possible fine but Motsepe said preliminary investigations have indicated gross negligence on the part of the technical team and management.

“I would like to apologise to all the supporters and members of the Mamelodi Sundowns family‚” said Motsepe.

“As well as the organisations that are involved in football and all the people who love and follow football in South Africa and on the rest of the African continent for Tebogo Langerman being listed as a substitute during the recent Nedbank Cup final contrary to the rules of the PSL and SAFA.

“In my capacity as President of Mamelodi Sundowns‚ I am responsible and accountable for everything that happens at Mamelodi Sundowns; whether I knew or did not know or was not aware or involved in the matter.

"Our preliminary investigation indicates that the Management and Technical Team were grossly negligent and this behaviour and conduct is totally unacceptable and will not be tolerated.

“A formal disciplinary hearing will be held as soon as possible and the appropriate action‚ including dismissal where the circumstances legally justify‚ will be implemented. We are a caring‚ loving and forgiving organisation but we also have a duty to protect the reputation‚ integrity and good name of Mamelodi Sundowns. We have to make sure that this kind of grossly negligent and reckless behavior does not happen again.”