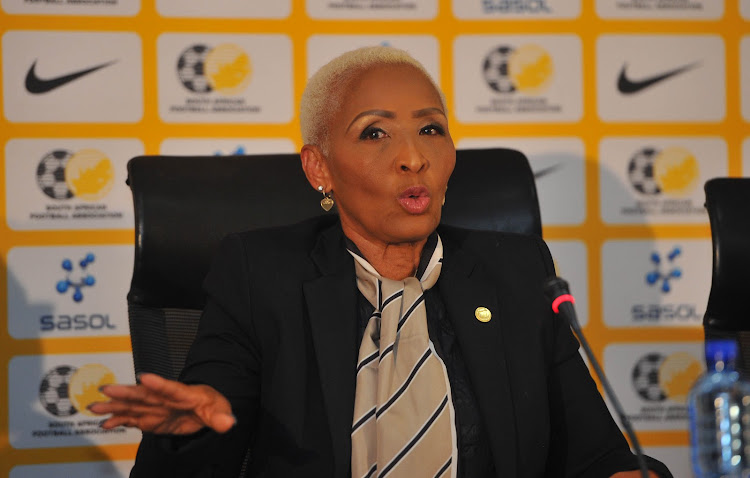 The SA Football Association (Safa) have endorsed a decision by Natasha Tsichlas to withdraw from the organisation’s vice presidency to make way for the reinstatement of Ria Ledwaba.

Tsichlas was last weekend unanimously appointed as vice president of Safa but recommended for the return of Ledwaba who was removed together with Gay Mokoena earlier in the year.

After she was removed‚ Ledwaba‚ who was the first woman vice president of Safa‚ promised to fight the organisation’s decision in an arbitration process‚ saying it was an injustice to women in the country.

Safa said in a statement Ledwaba’s return is made possible by Natasha Tsichlas stepping down as a current vice president.

“Safa is happy to endorse the presentation of Natasha Tsichlas and to support it from one of our selfless women leaders who offered to step back from the VP post for Ria Ledwaba to return‚” said Safa chief executive Adv Tebogo Motlanthe.

“We want to reiterate that this must not be viewed as condonation (sic) of wrongdoing but a response from an internationally recognized woman leader in football. We further agreed that the money that would have been spent on legal costs is better served to provide our 52 Regions with financial support to further football development.

Tsichlas had been appointed vice president three months after Ledwaba was removed along with fellow vice president Gay Mokoena in a Safa national executive committee meeting on June 20.

“I was unanimously appointed as vice president of Safa on Saturday‚ 19 September 2020 and immediately shared my concerns as the longest-serving woman in football structures in the country and internationally‚” Tsichlas was quoted as saying.

“Pursuing the matter of arbitration‚ in my view‚ may be prolonged and costly. As a businesswoman‚ I always believed that the money in football must be used to promote the development of football. I therefore requested a consultation on the matter.

“The NEC having deliberated on the matter and having considered my submission agreed that it would be wise to withdraw from the arbitration process and reinstate Ria Ledwaba as Vice-President of Safa.

“This however‚ must in my view not be regarded as my agreeing with or condoning any act of misconduct or turning a blind eye to any wrongdoing. The women on the SAFA Executive were insulted‚ abused‚ humiliated and even had their lives threatened by people who have made no contribution to the growth of football in our country‚” added Tshichlas.

“Safa is a leader in promoting women in football (administration‚ coaches‚ referees‚ national team coaches‚ promotion of education and the promotion of our players internationally).

“Ria Ledwaba sold her [PSL] club [Ria Stars] in 2002 and left football. After I served on the 2010 FIFA World Cup Organising Committee as a Board member‚ I convinced the NEC to bring Ria back to football in 2013.

“I am happy that I could convince the NEC then and express my appreciation to the NEC to agree to withdraw from the arbitration and to reinstate Ria Ledwaba‚” concluded Tsichlas.

Mokoena was removed as VP in June ostensibly in response to a scathing report the former acting CEO authored making several startling allegations of abuse of power against Safa president Danny Jordaan.

Ledwaba was removed at the same time apparently due to approaching Sports Minister Nathi Mthethwa expressing concern with how the response to Mokoena’s report was handled.