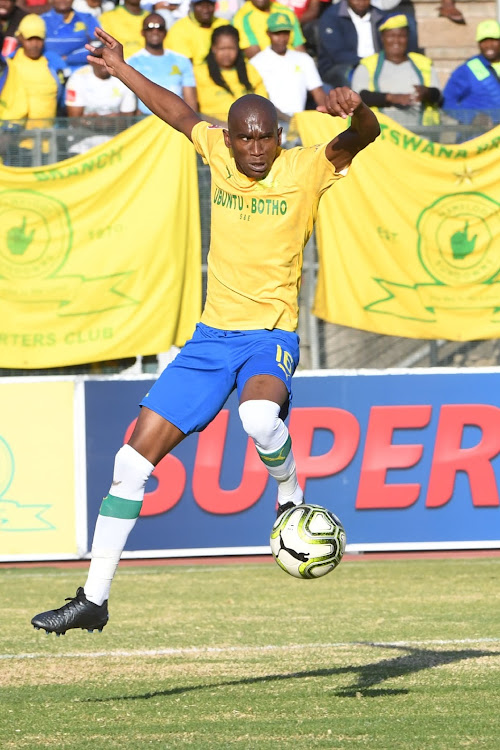 Mamelodi Sundowns coach Pitso Mosimane is not sure whether veteran defender Anele Ngcongca will stay on at the club next season.

There have been contradictory stories about Ngcongca after Belgian side KSV Roeselare dropped a bombshell in July by claiming that they had secured the services of the 32-year-old former Genk star.

This after Ngcongca signed a one-year extension with Sundowns and was in camp preparing for the restart of the league. But his agent Mike Makaab came out and said there was no truth to the KSV claim and that he was still a Sundowns player.

Asked if the right-back will still be with Sundowns after the Nedbank Cup final on Saturday against Bloemfontein Celtic, Mosimane said he was not sure but would love to have him.

“I think you know my heart and feelings about Anele, one of the most underrated right-backs in the country,” Mosimane said during a virtual press conference yesterday.

“Anele can play against speedy wingers. He has a sense of positioning himself; he doesn’t even make a lot of tackles. He is an experienced man. I mean, the guy has played Champions League in Europe and he has won many titles in his career.

“I always vote for him because he doesn’t get the praise he deserves. Since Thapelo [Morena] got injured we have been stable and he helps us a lot. He is always chatting and advising the youngsters. It would be sad to lose him, to be honest, but I don’t know what’s happening because we are in the bubble. I would not like to lose him.

“But I also have to accept if he has to go we must understand that situation with him.”

Pitso Mosimane has explained why he stuck by his captain Hlompho Kekana even as he appeared to struggle in some of Mamelodi Sundowns games as they ...
Sport
1 year ago

With Sundowns continuing to beef up the squad as they look to dominate the domestic league and CAF Champions League, Mosimane said there won’t be a complete overhaul of their squad. Sundowns have added Mothobi Mvala and Peter Shalulile to their squad after the early signing of Gift Motupa, Haashim Domingo, Ricardo Goss, Lesedi Kapinga and George Maluleka.

“We also deserve to sign players now. Everybody has been signing, so give us a chance. We only signed two last year. The perception is we are signing a lot of players without acknowledging the MDC [MultiChoice Diski Challenge] players we have,” Mosimane said.

“There won’t be an overhaul. You must be careful. The guys have been winning the titles and they are senior players. When we had injuries this year we struggled so we need to build a team over a successful team.

“These players have been putting [in] over 50 games a year and you need to understand that mileage is getting higher so we need those players to teach the upcoming ones.”