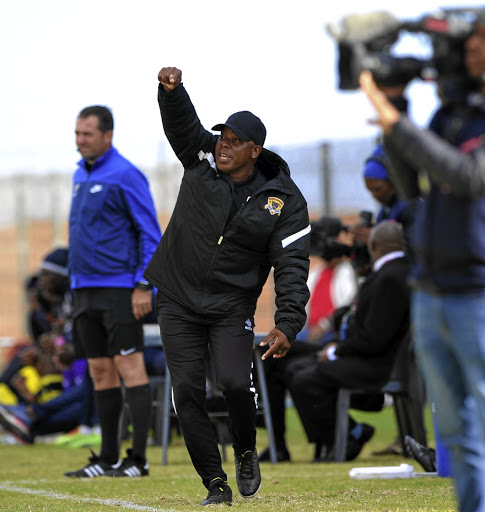 Black Leopards made a strong statement about their intentions to remain in the Premiership, dispatching Ajax Cape Town 1-0 in the promotion play-offs tie at FNB Stadium yesterday.

Leopards were a bit lukewarm, but still managed to sneak past a spirited Ajax, with Mwape Musonda the scorer of the only goal of the match. Both teams are now equal on three points after the Urban Warriors beat Tshakhuma Tsha Madzivhandila (TTM) 3-2 on Sunday.

The Capetonians stringed together more passes in Leopards’ half. Sonwabile Mfecane and Rodrick Kabwe on the right and left flanks respectively, were a thorn in the flash to the Leopards rearguard in the first period.

The Ajax wingers delivered some dangerous crosses to locate their towering marksman Eleazar Rodgers. However, the resultant efforts were either off target or too weak to trouble astute Leopards shot-stopper King Ndlovu.

Despite their dominance, Ajax found themselves trailing 1-0 as early as the 25th minute – thanks to  Musonda’s well-taken strike that beat Urban Warriors keeper Nick Hengelman.

Having limped off just four minutes before the hour-mark against TTM, veteran defender Rooi Mahamutsa didn’t make the match-day squad, with Keegan Johannes, who’d replaced him against Tshakhuma, starting.

Netting Ajax’s second goal, the equaliser against TTM, rewarded Mfecane with a starting slot for Chumani Butsaka, who would enter the fray to replace the GladAfrica Championship’s Golden Boot winner Abednego Mosiatlhaga (with 18 goals) in the 15th minute after suffering what looked like a pulled hamstring.

Conversely, Leopards welcomed their talisman Musonda after missing the 3-0 defeat, which saw them end up 15th on the top-flight table, to eventual champions Mamelodi Sundowns.

With Edwin Gyimah having controversially left the camp in the wake of their defeat to Sundowns, Lidoda Duvha drafted Thivhavhudzi Ndou in the starting XI to partner Isaac Masia at the heart of defence. Gyimah is understood to have sulked and left the team at Dobsonville Stadium without saying a word.