Pitso rubs title success in the faces of doubting Thomases 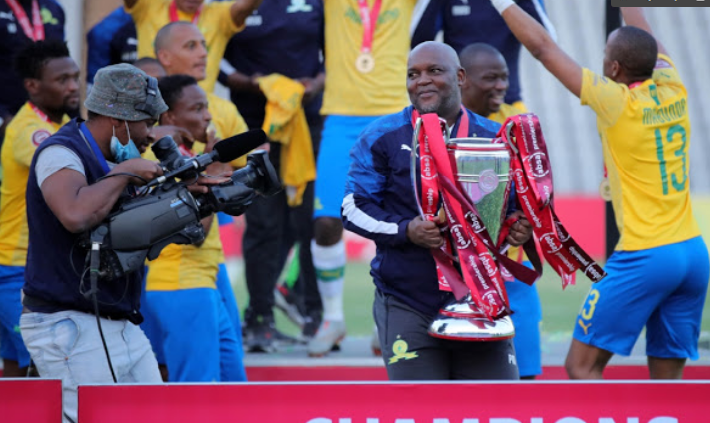 Mamelodi Sundowns mentor Pitso “Jingles” Mosimane has narrated why this season’s league title is most special than all the titles he’s won.

Mosimane continued with his championship pedigree at the weekend as Sundowns pipped Kaizer Chiefs to the league title, thanks to their 3-0 win over Black Leopards at Dobsonville Stadium.

Lebohang Maboe netted a hat-trick to gift the Brazilians the  "La Decima" (10th league title), condemning Lidoda Duvha to the 15th spot. The victory put Downs on 59 points, two ahead of Chiefs, who’d been top of the table since the second game of the campaign in August last year until they drew 1-1 with Baroka on the final day.

A relived Mosimane, who’s now won five league titles with Sundowns, disclosed this season’s title was sweetest of the four previous championships. Mosimane insinuated the triumph was gratifying because it silences his doubters at the club, giving a hint of internal squabbles.

“It’s been difficult at the club; it was very difficult for me. There were a lot of doubters, even internal at Mamelodi Sundowns. Lots of people not sure but the trophy is here.’’

Legend: Irrepressible Pitso Mosimane takes his place among the greats

Pitso Mosimane's place among the greats was never in doubt but in case there were still any skeptics in the room, he stepped things up a notch on ...
Sport
1 year ago

The Downs coach went as far as saying this season’s league glory feels like winning the CAF Champions League, a trophy they clinched in 2016. It’s the Tshwane side’s 10th league title.

“We’ve won trophies, we’ve celebrated but this one is the best I have ever held. I think I can put it as the same way as the Champions League,’’ noted Mosimane.

Funnily, Mosimane also offered consoling words to Chiefs coach Ernst Middendorp for giving them a good run for their money. For the better part of the campaign, the two coaches threw jabs at each other, but Jingles appears to still respect his German counterpart.

“I would like to thank coach Middendorp; I said it yesterday that we have ran our race, me and him. I said it’s like boxing, for the two boxers, boxing at the end of the fight we hug each other,’’ said Mosimane.

“I said that before the trophy was won, that he ran the race and he kept me on the race and he gave Kaizer Chiefs a shock therapy, he brought different tactics but look where the team is. If the tactics were wrong, why until the last game that we won the league?”

Downs' focus now shift to the Nedbank Cup final, where they face Bloemfontein Celtic at Orlando Stadium on Saturday (3pm).