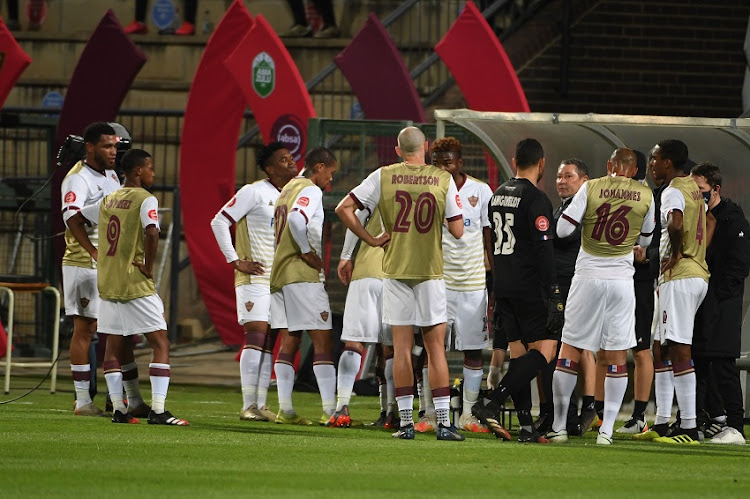 With all eyes on who will win the league and who will escape relegation in Saturday’s last round of Absa Premiership‚ it’s been easy to forget another big issue – the teams who will finish in the top eight and qualify for next season’s lucrative MTN8.

But for Cape Town City‚ Highlands Park‚ Bloemfontein Celtic and Stellenbosch FC‚ the mission to ensure they finish in the top half will only be forgotten once it is realised as an accomplishment or a failure on Saturday.

City‚ the most in-form team in the bio-bubble with four win wins and one draw (before Wednesday)‚ could well have confirmed their place in the top eight on Wednesday. Instead a 1-0 defeat to Highlands means they now have to at least get a point in their last tough match against third-placed SuperSport United at Loftus Stadium on Saturday.

With SuperSport also pressed by fourth-placed Orlando Pirates and fifth-positioned Bidvest Wits for the coveted third spot that will earn one of them a place in the Caf Confederation Cup next season‚ City’s mission won’t be an easy one.

But City may ultimately rely on their healthy +2 goal difference that they’re sitting on the seventh spot. Their chasers‚ Highlands on 38 points and -4 goal difference‚ Celtic on 36 points and +2 and Stellenbosch FC on 36 and -7‚ have a lot to do in their respective games if they’re to dispose City.

“Ja‚ we’re looking forward to it for a number reasons‚” Steve Barker‚ coach of Stellenbosch said of their last match against Pirates‚ who notched up a second successive victory in the bubble after their last-gasp 1-0 win over Maritzburg United on Wednesday.

“Pirates is a nice club to play against. We still have an opportunity to fight for top eight and also we know it’s our last game and after that we can go home.

“So it’s one game to give everything that we have‚ put our bodies on the line and fight for each and every blade of grass on the field and give Pirates a run for their money. We beat them (1-0) in the first round‚ so we would like to do a double.”

Celtic coach John Maduka may also rue not taking their chances in their 0-0 draw against Lamontville Golden Arrows on Wednesday. Phunya Sele Sele now have it all to do against Maritzburg at Tuks Stadium.

Little consolation for Maduka will be that Maritzburg are going to this match at least assured of finishing inside the top eight. But then Eric Tinkler may want to ensure that Maritzburg keep their sixth spot by at least winning one match in the bio-bubble after two losses and three draws in their previous five matches.

Highlands’ task is not an easy one‚ either‚ as they face AmaZulu‚ a team not 100% assured of avoiding finishing 15th and going to the dreaded promotion/relegation playoffs against Ajax Cape Town and Tshakhuma Tsha Madzivhandila‚ two teams from the GladAfrica Championship.