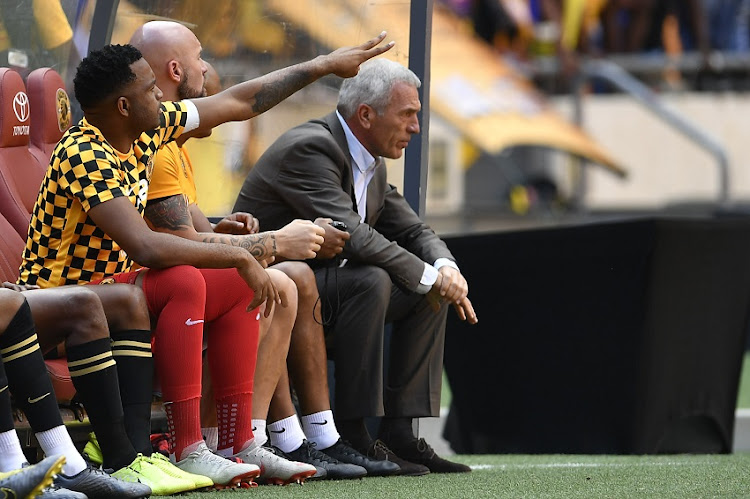 Daniel Akpeyi’s concussion that has ruled him out for the rest of the season should have opened the way for Itumeleng Khune’s long-awaited return to Kaizer Chiefs’ starting line-up for the Absa Premiership leaders’ two huge final fixtures of 2019-20.

But Khune’s unexplained absence from the bench since the restart of football‚ despite being in training‚ leaves only question marks as to who unpredictable coach Ernst Middendorp will have between the posts when his team meet Chippa United at Orlando Stadium on Wednesday night.

Level on points with defending champions Mamelodi Sundowns – who meet Polokwane City at Loftus Versfeld in Wednesday’s penultimate round (all matches at 6pm) – Chiefs have a +20 goal difference to Downs’ +15.

TimesLIVE has broken down the four options at keeper to start and be on the bench for Chiefs’ two biggest matches in five years‚ as they aim to reverse four previous trophyless seasons in their 50th anniversary campaign.

There is not much anyone doesn’t know about the veteran servant of Chiefs and one of the best goalkeepers in Africa in the past decade‚ whose distribution has been noted as particularly world-class.

Khune has served Chiefs through 13 seasons from his debut against Jomo Cosmos in August 2007. But‚ certainly‚ the former Bafana Bafana No.1 has had a torrid time with injuries for two seasons. He played just 13 league matches in 2018/19‚ and just two this campaign.

Akpeyi’s form as Chiefs charged to the top of the log and a 10-point lead over SuperSport United‚ and 13 over Sundowns‚ by December‚ also meant that even when Khune made his returns to play this season‚ he did not have too much chance to cement his place. Khune’s absence from even the bench since the restart of football from the five-month suspension due to Covid-19‚ though‚ was unexpected.

There have been reports of a personality clash with Middendorp. Surely‚ though‚ even a half-conditioned Khune – because he surely cannot be fully match fit – with his experience and ability to organise a defence‚ would be the best option in these massive final two games. All eyes will be on Chiefs’ starting XI against Chippa to see if that is what transpires.

Chiefs’ now quite long-time reserve goalkeeper can come in for some stick from the fans for supposedly being not entirely dependable‚ especially under the high ball‚ even if he’s a good shot-stopper. But that criticism‚ based on the instances when Bvuma has had to deputise‚ and has done so fairly well‚ would seem harsh.

His game‚ from his performances he’s had in the past two seasons (six and three league appearances) seems to have solidified under goalkeeper-coach Lee Baxter‚ who appears to have much faith in Bvuma. A selection under Baxter’s father‚ Stuart‚ to last year’s Africa Cup of Nations finals in Egypt‚ may or may not have had to do with such confidence in Bvuma from Lee Baxter.

Bvuma has been on the bench in all Chiefs’ six matches since the restart of football‚ replacing Akpeyi just before half time of Amakhosi’s costly 1-0 defeat against Bidvest Wits on Monday‚ and conceding Bienvenu Eva Nga’s 94th-minute winner. In theory‚ that makes Bvuma next in the pecking order for the last two games.

But Khune’s seniority‚ and pressure from the supporters‚ and perhaps inside the club too‚ could‚ and in actuality even should‚ see Bvuma back on the bench against Chippa.

The Pietermaritzburg-born goalkeeper came through the amateur wing of Wits University Football Club‚ who play at Marks Park in Emmerentia and have been a feeder team to Bidvest Wits‚ and was spotted by Chiefs with some impressive performances in the Varsity Cup. The 24-year-old re-signed with Chiefs‚ after being released‚ in November last year as cover when the club had injuries in their keeping department‚ and extended his contract in June.

Yet to make a PSL debut so it would be risky to play him in Amakhosi’s huge last two matches. Perhaps he has done enough on the reserves bench for the technical staff to feel he is worthy of that risk.

Chiefs’ players and Lee Baxter have raved about the 1.9-metre-tall teen and his potential‚ especially with his performances for the reserves in the MultiChoice Diski Challenge league. He is certainly one for the future and if he can realise his potential will follow a production line of keepers at Naturena that follows a trajectory from Brian Baloyi to Khune.

Molefe‚ from Dube in Soweto‚ began at seven years of age at Jabez Football Academy‚ and was spotted by Chiefs playing for the national under-17 team‚ and brought into their youth system‚ then promoted to the senior side at 16. That promotion was ostensibly for the teen to serve as an understudy and learn. It would be a shock if Middendorp were to take the unprecedented move of throwing in a 17-year-old keeper into these matches.