Itumeleng Khune in full training with Kaizer Chiefs: 'Ja‚ ‘Itu’ is around' 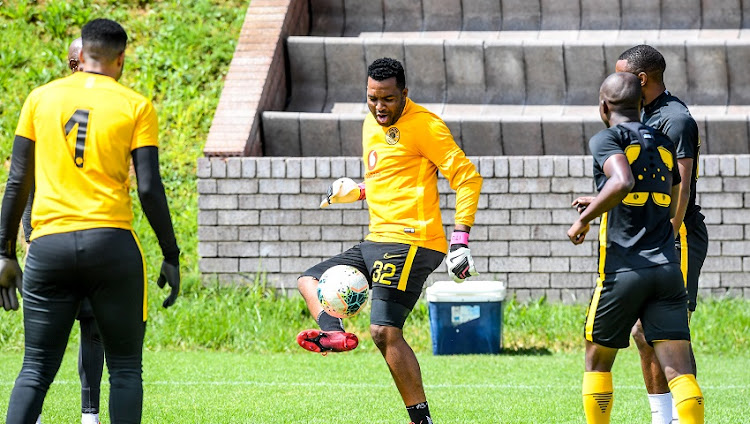 Itumeleng Khune is in full training with Kaizer Chiefs‚ but his level of match fitness is a mystery‚ as is the possibility of coach Ernst Middendorp recalling the Bafana Bafana goalkeeper to his starting line-up for Amakhosi’s huge final two matches of the season.

The announcement that Daniel Akpeyi – Chiefs’ No 1 goalkeeper in 2019-20‚ mostly with great success‚ at times less so – has concussion and is out for the remainder of the season has raised the question over whether Khune will make a return from the wilderness.

The question of what had happened to Khune was being asked as he was not even on the bench and Akpeyi conceded nine goals in six matches in the return to football. Chiefs have spurned a one-time seven-point lead in the bio-bubble to allow second-placed defending champions Mamelodi Sundowns to draw level on 53 points‚ Amakhosi leading on goal difference.

The questions on Khune have only intensified ahead of Chiefs meeting Chippa United at Orlando Stadium in Wednesday’s penultimate round (all matches 6pm). Middendorp’s other options at keeper are Bruce Bvuma‚ who has made four league and cup appearances in 2019-20‚ and young prospects Brylon Petersen and 17-year-old Karabo Molefe.

Asked on Tuesday if‚ given Khune has not been seen in a match squad during the bio-bubble‚ the goalkeeper has been in full training‚ Chiefs’ communications manager Vina Maphosa responded: “Ja‚ ‘Itu’ is around. He’s with the team‚ he’s been training.”

Maphosa said he has not had a report-back from Chiefs’ technical staff on whether Khune is match fit.

“I can tell you that he’s training‚ but not if he’s match fit. That can only be said by the technical people working with the team‚ of which we are not privy to that detail‚” Maphosa said.

Amakhosi’s media man said he understands the context of these being Chiefs’ biggest two matches in five years‚ having not won a trophy in their past four campaigns‚ and Akpeyi being injured and Amakhosi’s Bafana No.1 having done an unexplained disappearing act. Maphosa was asked if Chiefs will make sure Khune plays.

“I will answer that one not even diplomatically or otherwise. The fact is that for any player‚ in any circumstances‚ be it high or low‚ the decision of availability is decided after the last training session‚” he said.

“Even if it is an extraordinary situation‚ the preview of the match we do after the last training. The last training is this [Tuesday] afternoon. And if the opportunity presents itself [for Chiefs’ media department] to interview the coach and pose that question‚ we definitely will.”

Chiefs have not explained Khune’s absence. The closest they came was when Middendorp‚ after the team’s return with a 1-1 draw against Bidvest Wits‚ said the keeper “missed some training sessions for different reasons” because he had some “challenges”‚ without expanding.

Maphosa was asked if 33-year-old Khune has had any contractual disagreements with Chiefs. “No‚ it’s far from that. His contract is not under scrutiny or question‚” he said.

Asked to comment on reports that there has been a personality clash between Middendorp and Khune‚ Maphosa replied: “I haven’t had it submitted to us to communicate anything to the supporters.

Akpeyi was replaced by Bvuma with a head injury just before half time in Chiefs’ 1-0 defeat to Wits on Sunday.

Chiefs have a +20 goal difference and Sundowns‚ who meet Polokwane City at Loftus Versfeld on Wednesday‚ have +15.

Sundowns’ final match is against Black Leopards at Dobsonville Stadium on Saturday‚ and Chiefs meet Baroka FC at Bidvest Stadium‚ all matches in the final round kicking off at 3.30pm.