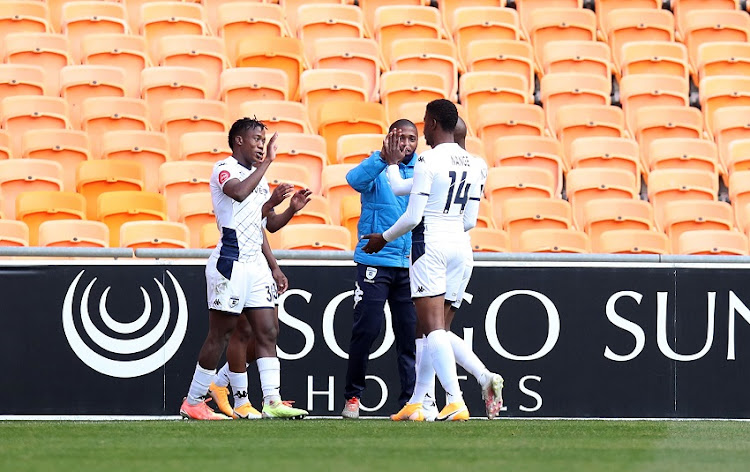 Bidvest Wits finally found their scoring boots and notched their first win in five games in the Absa Premiership‚ 2-1 against AmaZulu at FNB Stadium on Friday afternoon.

Having gone both their bio-bubble league matches without scoring – with 0-0 draws against Orlando Pirates and Lamontville Golden Arrows – teen forward Rowan Human opened the scoring for Wits in the 58th minute and substitute Deon Hotto scored a second in the 70th.

AmaZulu remain rooted in the danger zone in second-last place. Wits moved up to fourth.

The tough but expressionless Covid-19 football of the first half was about as much fun as a pandemic.

Chances were almost nonexistent. Wits goalkeeper Ricardo Goss came out of his area but lost the ball to Sphesihle Maduna who attempted a lob at an exposed goal‚ Lorenzo Gordinho getting up to a crucial aerial intercept‚ though seemingly with a use of the arm that went unpunished.

Usuthu pushed for a goal in first-half injury time.

Talent Chawapiwa fed the run into the area of winger Sphelele Magubane‚ who had the ball stolen by Gordinho. Siyethemba Sithebe squeezed a low shot through a crowded area but without power‚ making for a regulation save for Goss.

The second half was far more watchable as both teams found some form of rhythm.

Wits upped the ante at the beginning of the half‚ as first Cole Alexander struck a 30-yard drive cleanly that had to be palmed over by AmaZulu goalkeeper Siyabonga Mbatha.

The Clever Boys got their first strike when a Zitha Macheke was aimed at the run Phathutshedzo Nange‚ who could not control under the attention of a defender‚ the ball falling to Rowan Human. The 19-year-old winger struck a classy finish for his first senior goal.

Dzvukumanja turned in midfield and fed the run of Nange‚ who put another substitute‚ Deon Hotto‚ through. The Namibian forward star‚ a little flat in the return to football so far‚ found his spark with a smacking a low finish past Mbatha.

AmaZulu pulled one back through their own replacement‚ Lehlohonolo Majoro‚ with one of the veteran striker's goals form the top drawer as he took a cross on his chest and volleyed beautifully past Goss.