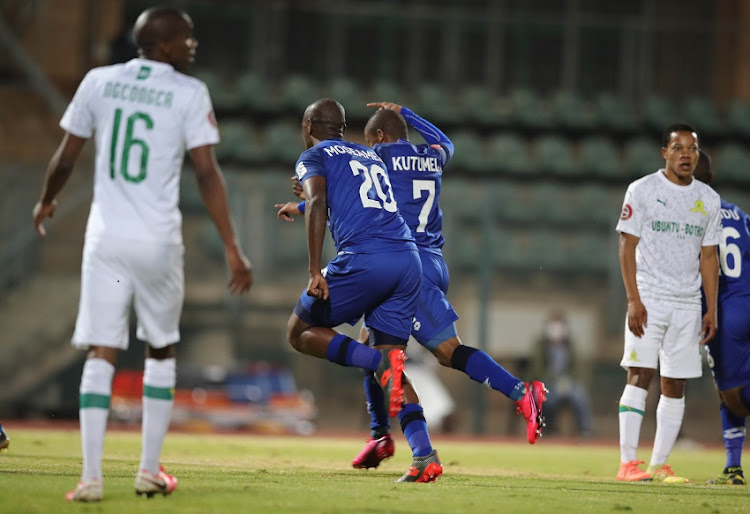 Mamelodi Sundowns squandered an opportunity of closing the gap on log-leaders Kaizer Chiefs to three points when they were held to a 2-2 draw by Maritzburg United at Lucas Moripe Stadium on Friday night.

A win for the Brazilians could have strongly brought them closer to Chiefs at the summit but they are now five points behind with five games remaining and on a run of four league matches without a win.

Amakhosi may further increase their advantage to eight points on Sunday where they take on Stellenbosch FC at Orlando Stadium in a game they will be looking to return to winning ways.

Sundowns are yet to win after four league games since football resumed following the long Covid-19 break as a result of costly draws with Maritzburg, Orlando Pirates and Highlands Park and a loss to Cape Town City.

For Maritzburg United, this share of the spoils keeps them rooted on sixth spot and they will fight to stay in the top eight bracket during their remaining four games.

Sundowns coach Pitso Mosimane included midfielder Andile Jali in his starting line-up for the first time since football returned and he gave a solid performance in the heart of the midfield with captain Hlompho Kekana.

Jali strangely started on the bench in matches against Bidvest Wits, Orlando Pirates, Highlands Park and Cape Town City since the resumption.

Sundowns opened the scoring after 25 minutes through Kekana who found the back of the net with a shot from close range after he received a pass from Gaston Sirino.

Jali stole the goal from Tebogo Tlolane on the edge of the penalty box and released well-positioned Sirino on the right wing who found unmarked Kekana in the box to finish for his third goal of the season.

Sundowns’ lead did not last long as Maritzburg equalised five minutes later from the boot of Rushine de Reuck who pounced on a mistimed clearance header by Motjeka Madisha.

Sundowns increased their lead four minutes after the break through the successful penalty conversion from Ricardo Nascimento who was nearly denied by Maritzburg goalkeeper Richard Ofori who dived the right way.

Sundowns were given a penalty after referee Abongile Tom ruled that Maritzburg defender Nazier Allie handled the ball in the box and the usually reliable Nascimento registered his sixth goal of the season.

The fourth goal of the match arrived just before the hour mark when Thabiso Kutumela equalised for Maritzburg with a beautiful curling shot that gave Sundowns goalkeeper Denis Onyango no chance.

In the 70th minute, Sundowns mission of launching a comeback suffered a huge setback when Nascimento received his second yellow card for deliberately obstructing Kutumela.

Both teams will be back in action on Monday with Sundowns hosting Golden Arrows at Dobsonville Stadium while Maritzburg will be at home to Bidvest Wits at the Tuks Stadium in Pretoria.