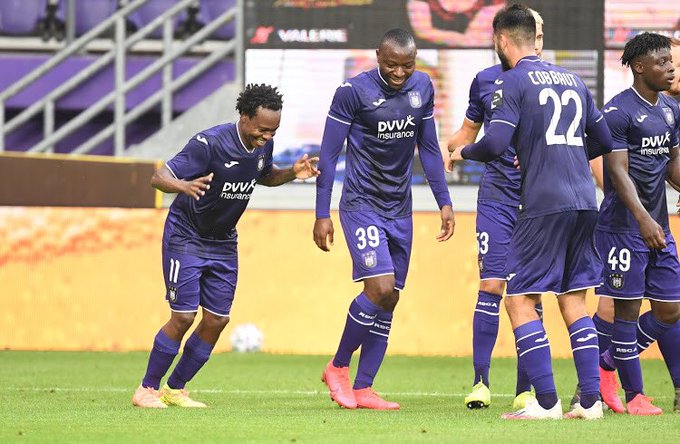 Percy Tau celebrates with his RSC Anderlecht teammates after scoring on debut for the Belgian giants.
Image: RSC Anderlecht/Twitter

RSC Anderlecht's social media administrators have called Percy Tau "an absolute baller" after he struck a gem of a goal chipping St Truiden goalkeeper Kenny Steppe to score on debut in his new club's 3-1 Jupiler Pro League win on Sunday.

Tau came off the bench in the 64th minute for Michel Vlap in at Anderlecht's Lotto Park home ground in Brussels.

RSC have started with a win and a draw in their first two Belgian top-flight matches.

In the third minute of injury time Tau brought down a punt up-field from defender Elias Cobbaut‚ turned‚ and with options to pass‚ audaciously chipped in over Steppe from the left edge of the area.

Tau showed a number of good touches and some of his classic skills in his half-hour introduction for his new team‚ where he is on loan from English Premier League Brighton & Hove Albion.

If you missed the goal Mzansi here it is. Percy Tau is an absolute baller 🔥🔌 pic.twitter.com/tw365e6rbg

The goal prompted Anderlecht's official Twitter account‚ which has been swamped by South African football supporters since Tau switched from last season's Belgian champions Club Brugge to RSC‚ to post a video of the strike‚ writing: "If you missed the goal Mzansi here it is. Percy Tau is an absolute baller."

Anderlecht‚ who finished eighth last season‚ began the 2020-21 Jupiler League with a 2-2 away draw against Mechelen.