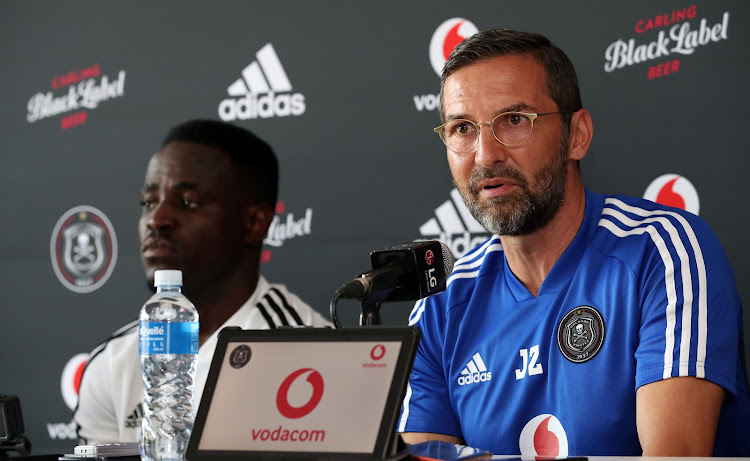 Orlando Pirates will be patient allowing Gabadinho Mhango to find his scoring touch‚ but also have to be aware that they have good strikers on their bench‚ coach Josef Zinnbauer has said.

Pirates notched a second 0-0 draw against Bidvest Wits in their return to football at the weekend and Zinnbauer hinted that they will need to make a decision at some stage over whether to bring their other striker capable of being prolific‚ big Tshegofatso Mabaso‚ into the starting line-up.

This was after Bucs followed Tuesday's goalless draw against Mamelodi Sundowns at Dobsonville Stadium with another against Wits at Ellis Park.

Mhango's white-hot form as Zinnbauer arrived in December helped the coach get off to a flying start.

The Malawian‚ who had four goals by November‚ raced to the top of the Absa Premiership chart with 10 goals in eight games as Bucs charged into the top three.

His subsequent four games without scoring have coincided with a defeat and three draws for Pirates.

"You know as a striker you need the self-confidence and you need the trust from the coach‚" Zinnbauer said after a draw where Mhango had the best chances seeing a low strike denied by an excellent save by Wits goalkeeper Ricardo Goss.

"And it's not so easy too that we have a good striker or two on the bench.

"Mhango scored a lot of goals in the first games. (On Saturday) he had one of the best chances.

"A striker‚ when he doesn't think about anything‚ will score. And maybe at the moment he's thinking a little bit too much.

"But he's doing a good job. He runs‚ he works for the team‚ he does defensive and offensive work. He tries and tries.

"But that's how it is as a striker. You have moments where you can do what you want and you still won't score.

"And now it's the decision we have to make. Normally we will give him the trust and he will meet the trust.

"It's too close now to after the game. And the next day will make the plan for him."

Zinnbauer might consider dropping Mhango deeper‚ to play behind Mabaso‚ who scored six goals in the first half of the season‚ in a starting duo that would seem to hold promise.

Then the coach would have to deploy Luvuyo Memela‚ the in-form feeder to Mhango in the Malawian's spell of form‚ wider‚ or in a drifting role‚ or in a front three.

Mostly‚ Zinnbauer said‚ Bucs just have not had the luck to hit the back of the net in four games without a win where they have created chances.

"But we have a recovery tomorrow and then the focus is on the next game‚ and you cannot just do what is normal‚" the coach said.

"But we will get it. I know it will come back. And then we will get the points and the success."