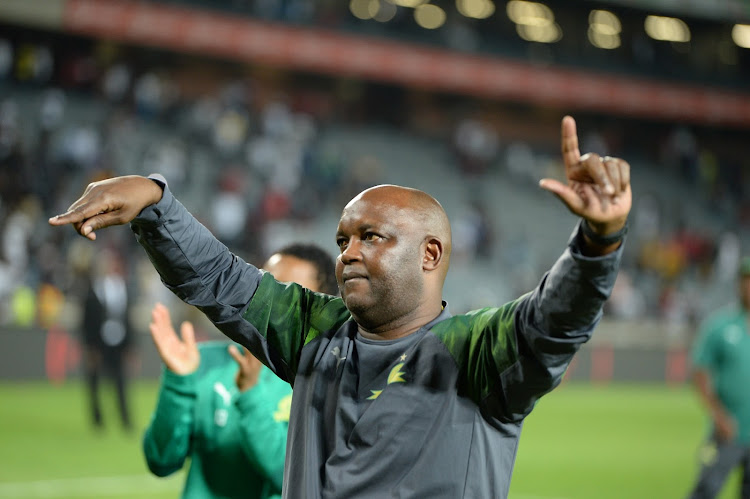 Mamelodi Sundowns coach Pitso Mosimane during an Absa Premiership match against Pirates at Orlando Stadium on January 15. Sundowns' form since the season resumed at the beginning of the month has been a huge source of distress for Mosimane, after draws against Highland Park and Orlando Pirates and Monday's defeat to Cape Town City.
Image: Lefty Shivambu/Gallo Images

Cape Town City may have a dedicated fan base that supports the club through thick and thin, but it is highly unlikely any of their supporters will have been as emotionally invested in the side's wellbeing as Kaizer Chiefs coach Ernst Middendorp probably was on Monday night.

City faced title-chasing Mamelodi Sundowns at Loftus stadium on Monday in a tense league match that will have kept Middendorp and millions of Chiefs fans around the world on their toes for the full 90 minutes.

Long-time Absa premiership leaders Chiefs had a vested interest in the outcome as they needed City to pull the rug from underneath the Sundowns players' feet and either beat the second-placed Brazilians, or at least take a point from coach Pitso Mosimane's charges.

City came to the party when they beat Sundowns 3-2 in a five-goal thriller that slightly tipped the scales in Chiefs' favour as the title race heads into the home straight.

A brace from Surprise Ralani and a third from Kermit Erasmus where enough to give City a huge result that suddenly gave Chiefs a lot of breathing space at the top. Sundowns managed to find the back of the net twice through an Edmilson Dove own goal and a late strike from Keletso Makgalwa, but City held on to secure all three points.

City were always going to be formidable opponents and they signalled their intentions very early in the first half with Erasmus, Shane Roberts and Fagrie Lakay asking questions of the Pretoria side.

But it was Ralani who broke the deadlock when he scored his fourth goal of the season, beating Sundowns goalkeeper Denis Onyango with a low shot on the rebound in the 12th minute. Onyango had done well to save the initial shot, but Ralani reacted very quickly and put the ball in the back of the net with the Ugandan stranded.

Erasmus and Roberts continued to make a nuisance of themselves and the former was eventually rewarded when he deftly chipped the ball into the back of the net in the 43rd minute, with Onyango once again stranded.

Sundowns dug deep and pulled one back when Wayne Arendse pressured Dove into scoring an own goal after a corner from Gaston Sirino just before the break.

Sundowns made a bright start after play resumed in the second half, but they always ran the risk of exposing themselves in the back as they desperately went in search of a goal.

True to form, City punished them again when Arendse carelessly lost possession at the edge of the area and that man Ralani did not need a second invitation to take full advantage.

Ralani chipped Onyango with a curling shot that sailed over the Sundowns goalkeeper's head and into the back of the net in the 53rd minute.

Makgalwa ensured a nervous finish to the game when he scored Sundowns' second of the night deep into added time.

But City held on to complete a memorable victory that will be celebrated by the Chiefs supporters as if their side actually took to the pitch at Loftus.

The result maintained Chiefs' six-point lead over Sundowns with six games to play for both side.

Sundowns' form since the season resumed in the beginning of the month after a five-month coronavirus-enforced hiatus has been a huge source of distress for Mosimane, who will be pulling his hair in frustration after his charges dropped points in drawn matches against Highland Park and Orlando Pirates before Monday's defeat.

Things do not get any easier for the two title-chasing adversaries. Sundowns face perennially tricky Maritzburg United at Lucas Moripe Stadium in their next outing on Friday night, while Chiefs engage equally unpredictable Bloemfontein Celtic at Tuks Stadium on Wednesday.