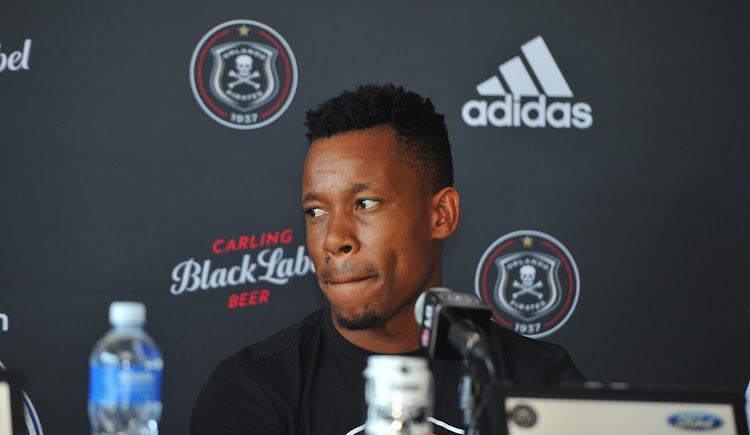 Happy Jele has won a double treble with Orlando Pirates and lost in the final of the 2013 Caf Champions League as captain.
Image: Sydney Mahlangu/BackpagePix

After finishing as runners-up in the league for the past two seasons‚ Orlando Pirates appear to have gone backwards and do not seem to have the sting required to achieve a similar feat or even go one better in the current campaign.

The third-placed Pirates are struggling for results and goals as they head into their last remaining five Absa Premiership encounters‚ starting with the outing against Baroka FC in Johannesburg on Tuesday evening .

They have not won a match or scored in their past four matches and as a result are 10 points behind leaders Kaizer Chiefs.

They are four points adrift of second-placed defending champions Mamelodi Sundowns as the season approaches the final stretch.

Their third spot‚ which currently guarantees them a place in the Caf Confederation Cup‚ is also under threat as fifth-placed Bidvest Wits believe the two matches they have in hand could give them a say in the way things pan out in the top five positions on the final day of the season.

The sparkless Pirates‚ winless and scoreless in their past four matches‚ saw their outside chance of a title assault evaporate with successive goalless draws against Sundowns and Wits as the Premier Soccer League roared back to life last week following the Covid-19 disruptions.

But captain Happy Jele is confident his charges can mount a fight back for the ages and somehow secure a place in a Caf competition next season.

“Yes‚ we still believe we can get a spot in Caf. We just have to try and win all our remaining matches. Orlando Pirates is a big brand on its own and wants to play in Africa‚” said the 33-year-old Middleburg-born skipper ahead of the clash against Baroka at Ellis Park at 6pm.

Jele‚ who is in his 15th season with the Buccaneers‚ emphasised that Pirates is too big a brand not to rub shoulders with the continent’s elite in Caf competitions.

“Pirates is a big brand and wants to compete for each and every trophy in the league and on the continent‚” said Jele speaking to the media via Zoom on Monday.

“The brand itself wants to play in Africa. We want to be there‚ so we just have to finish on a good position right now.”

Only champions and runners-up qualify for the Caf Champions League while the team that finishes third plays in the less prestigious Caf Confederation Cup along with the winners of the Nedbank Cup to conclude SA’s four representatives on the continent.

Pirates have 42 points from 25 matches‚ leaders Chiefs are on 52 while the second-placed Sundowns have amassed 44.

Replacing defending champions Sundowns in second place for a top two spot looks highly unlikely while overtaking Chiefs would require a capitulation of massive proportions from the leaders.

But still Jele was optimistic even though the odds are stacked against his team.

“It is very good for the brand itself to finish in a good spot so that we play in the Caf competitions next season.”

Pirates top scorer Gabhadinho Mhango has almost forgotten how it feels like to rattle the net having not done so in the past four matches.

The impotency in front of goal was not helped by the discipline issues that saw key attackers Thembinkosi Lorch and Justin Shonga missing the last two matches after they were banished from the team for breaching coronavirus safety regulations.