Sundowns coach Pitso Mosimane: 'It's not coming up as easily as it's supposed to' 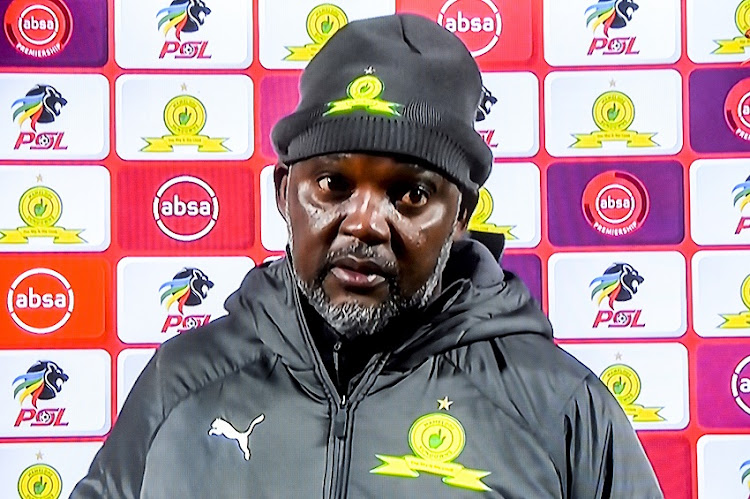 Mamelodi Sundowns are struggling to find a rhythm‚ coach Pitso Mosimane has admitted after his team clearly battled to go through the gears again being held to a second Absa Premiership draw‚ 1-1 by Highlands Park on Friday night.

When you have a finely-tuned machine that seemed to revel in barely having a break in seven years‚ thanks to its continental exploits‚ a four-and-a-half-month layoff due to the suspension from Covid-19 does seem entirely likely to hit you that much harder.

An impressively-conditioned‚ well-structured Highlands proved another formidable stumbling block to Downs at Dobsonville Stadium following bruising encounters in the Brazilians' return to football with a Nedbank Cup semifinal win against Bidvest Wits and midweek 0-0 draw against Orlando Pirates.

Mosimane said his players' conditioning is not the problem‚ so much as a loss of rhythm due to the long period of inactivity.

"There's no challenge - we don't complain about playing games back-to-back. We have played games back-to-back‚" the coach said‚ asked in his online post-match press conference about a programme that will see Downs play their fourth match in 10 days against Cape Town City at Loftus Versfeld on Monday.

"The challenge is the long layoff of four months without proper training‚ etcetera.

"The first two weeks back we trained in small groups. So to get the rhythm that we are always used to or want‚ it's not coming up as easily as it's supposed to. You can see it.

"And all you can do is to try and revive the team and try and encourage the players to play a little bit more when you don't get it easy. When you don't have Sibusiso Vilakazi and Themba Zwane and Gaston Sirino [as Sundowns have in the past week's matches] on the pitch it's difficult.

"The load is there. There's no problem with the load. If you're coming from a foundation of four months without playing football the challenge is to get our proper rhythm and fluidity‚ which is the space that we play in.

"And you come from Wits and Pirates‚ which are tough games‚ and Highlands is a tough game too.

"Let's be honest‚ it's not easy‚ it's very difficult. And‚ ja‚ it's difficult [right now] for everybody. So what can you do?"

Second-placed Sundowns drawing again will have been closely watched by leaders Kaizer Chiefs‚ who can take a six-point gap over the Brazilians‚ who have a game in hand‚ should Amakhosi beat 14th-placed Polokwane City at Loftus on Saturday.