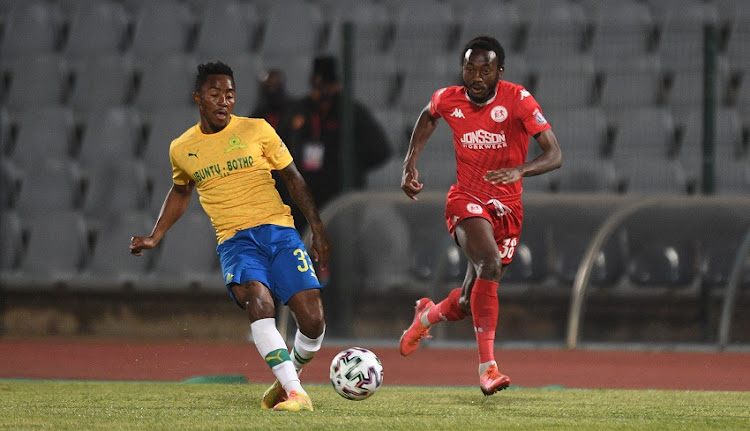 Mamelodi Sundowns are yet to rediscover the flowing football the Absa Premiership champions and league’s most destructive team have become renowned and infamous for‚ labouring to a 1-1 draw against lively Highlands Park on Friday night.

Peter Shalulile put Highlands ahead in the sixth minute at Dobsonville Stadium. Sphelele Mkhulise equalised in the 40th.

Kaizer Chiefs’ interest in a Sundowns result will have been piqued for a second time in a week after the Soweto league leaders spurned a chance to take a six-point lead conceding late in their midweek draw against Bidvest Wits. That was on Wednesday‚ the night after second-placed Downs’ stalemate against Orlando Pirates.

Chiefs meet 14th-placed Polokwane City at Loftus Versfeld on Saturday with a second bite at the cherry for a half-dozen-point gap with a win.

Sundowns are a team who like to plan to the finest detail. Coach Pitso Mosimane has said the various kickoff dates mooted in the build-up to the restart from the suspension of football due to Covid-19 caused havoc with how they conditioned the players‚ and even caused injuries.

Downs had big games coming back in their Nedbank Cup semifinal win against Bidvest Wits and 0-0 midweek draw against Bucs. Still‚ Mzansi’s most marvellous proponents of flowing football’s sluggishness has been notable.

Against Owen Da Gama’s nuggety Highlands‚ playing their first game back‚ things were never going to get any easier.

Park – always able to run for 90 minutes – looked well conditioned for their five months out of action. Their compactness gives any team a run for their money on any day‚ or night.

Sundowns found some of the flow Mosimane had said he was looking for before the game – enough to suggest they will be the real Brazilians again soon enough. But that still only came in patches‚ and not enough to earn three points against a sturdy side like Park.

Highlands’ shape and early forcefulness earned them a goal soon after the start – scored a shade softly‚ though also with a predatory instinct.

From defender Limbikani Mzava’s free-kick played in from the right in his own half Downs centreback Motjeka Madisha seemed caught between unsuccessfully winning the ball in the air or getting tight on Shalulile. The Zimbabwean could then turn and strike his 13th goal of the season from a narrow angle past Denis Onyango.

Sundowns again battled to get through the gears. But they found their best rhythm of the game in the last 10 minutes of the break.

Sibusiso Vilakazi teed up Themba Zwane‚ whose drive was pushed over by Tapuwa Kapini.

Vilakazi had another influential touch‚ feeding Gaston Sirino on the right edge‚ whose chip in found Mkhulise to rise up impressively for a small man and nod a header in past Kapini.

Highlands kept plugging away with their iron shape and probes around Downs’ area‚ as Lindokuhle Mbatha‚ always lively‚ struck a shot form range that flirted with being on target early in the second half.

Mzava’s long throw was flicked on by Bevan Fransman for Shalulile’s header to sail dangerously close to an upright.

Sundowns‚ not surprisingly with matches coming thick and fast – three bruisers in six days for the defending champions – battled again for tempo in the last half-hour.