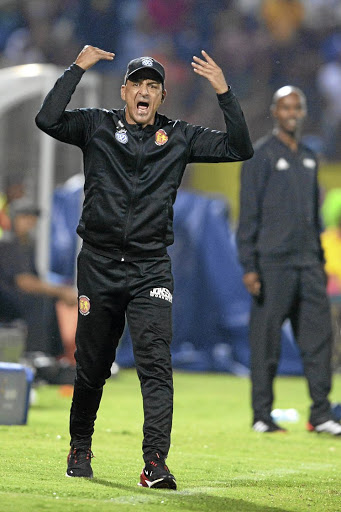 Coaches normally keep their cards close to their chest prior to matches, but loquacious Highlands Park's Owen da Gama is a special case.

Always publicly disclosing his game plan before matches is what makes Da Gama an anomaly. Going into their crucial league clash against Mamelodi Sundowns at Dobsonville Stadium - the ground the two clubs share as home in the bio bubble format, this evening (6pm), Da Gama has once again laid bare how they intend to play.

"We've got to be very conservative. If Sundowns score, it's very difficult for you to come back. So, we have to be conservative to make sure we defend very, very well,'' Da Gama said during a virtual media conference with SA Football Journalist Association yesterday.

"But obviously, we will try and use our pace to counter them, but still be disciplined in our defence because if they score it's very difficult to come back."

While the Brazilians have already played twice in the Biologically Safe Environment (BSE), having resumed play by beating Bidvest Wits 3-2 to book a spot in the Nedbank Cup final last Saturday and played out to a goalless draw versus Orlando Pirates on Tuesday; tonight's game is the first for the Lions of the North since mid-March.

Da Gama insinuated watching Sundowns' games against Wits and Pirates assisted him to plan for this evening's tie. The Highlands mentor emphasised they won't sit back, vowing to take the game to Pitso Mosimane's men.

"In the second-half [against Pirates] they showed a little bit of fatigue, but in saying that they know how to keep the ball which makes it difficult for the opposition,'' Da Gama stated.

"But we will definitely want to go at them, that is our aim. Hopefully, we can tie them more down because we will obviously be a fresher team. We are hoping to put a lot of pressure on them.''

Highlands Park will get their first taste of football in the bubble on Friday at Dobsonville Stadium when they take on Mamelodi Sundowns in the Absa ...
Sport
1 year ago

Highlands Park have received a big offer for the sale of their Premier Soccer League (PSL) franchise that will have to be considered if it can be ...
Sport
1 year ago
Next Article