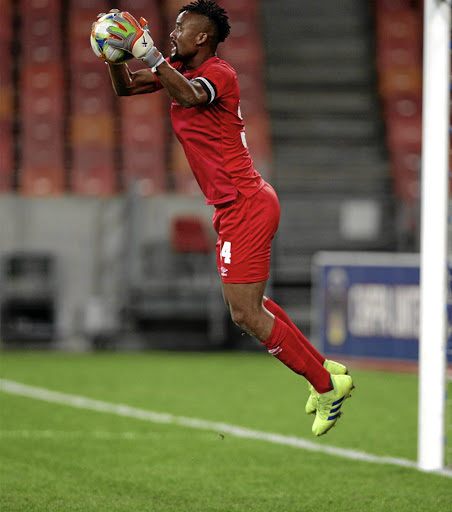 Focus and a hunger to win games are the ingredients Chippa United need to survive in the Absa Premiership, according to captain Veli Mothwa.

With just six matches remaining, Chippa are once again fighting for survival. The Port Elizabeth club are 12th on the log, with 26 points from 24 matches.

They are six points clear from the automatic relegation berth but only three points clear of the playoff spot.

Goalkeeper and skipper Mothwa, 29, says spirit is high in the camp. "Everything is okay and things are going according to plan. We are respecting the rules and following the protocols put in place.

"We are excited for the return of football and the players are looking forward to Friday's game against Cape Town City. The game will help us track how far we are in terms of fitness levels."

A win against City would give the Chippa squad much-needed confidence heading into the final five matches of the season. Besides today's encounter, the Chilli Boys will have Highlands Park, Baroka FC, Stellenbosch, Kaizer Chiefs and Golden Arrows to play before the season closes.

"Today's game will be difficult because we beat Cape Town City at home in the first round. So they will definitely want to avenge that defeat. It will be hard for us to win this game but we are determined to get as many points as we can to stay away from relegation.

"As a team we are tired of fighting relegation, so everybody is putting in extra work at training. It's about time we show our character and fight for maximum points in each and every game we play in the remaining fixtures because we don't want to find ourselves in the same situation as before."

Lehlohonolo Seema is desperately chasing a victory in his first match as Chippa United's coach tomorrow.
Sport
1 year ago

As a number of Premiership outfits have taken some of their MultiChoice Diski Challenge troops to the Biologically Safe Environment (BSE), boosting ...
Sport
1 year ago
Next Article