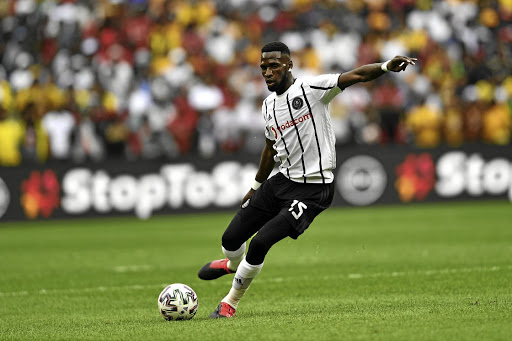 The reality that Orlando Pirates have now gone four straight games without scoring in the league isn't unsettling the club's coach Josef Zinnbauer.

Pirates' 0-0 draw away to Mamelodi Sundowns on Tuesday didn't just stretch their goalless run in the league to four matches but their winless streak as well in their last three games as well. Bucs last win was in February, where they scored their last goal - an own goal - to beat Black Leopards 1-0.

As much as this looks rather uninspiring, especially for a team with the league's top-scorer in Gabadinho Mhang0, who boasts 14 league strikes, Zinnbauer seems not to be making a big deal out of it.

"No [concerns about not scoring in the last four league outings]. we're trying and when we have a little luck we will have the goals. We will work on this and we have a chance. We were unlucky that we missed today [on Tuesday against Sundowns], but in the next games we'll score the goals,'' Zinnbauer.

Against Sundowns, the Buccaneers soldiered on without their ace Thembinkosi Lorch and striker Justin Shonga. The duo were dropped from the squad for "breaching protocols", according to the club's statement released a few minutes before the Tuesday game.

Zinnbauer hails the work of the Orlando Pirates fitness staff

Orlando Pirates coach Josef Zinnbauer has hailed the work of his fitness staff getting his team in shape for the return to football‚ after the ...
Sport
1 year ago

Interestingly, Zinnbauer was reluctant to shed more light on the events that led to the omission of Lorch and Shonga, referring all the queries to the club's app, where this shocking news was broken.

"The decision was a selection for the team and if you want more information go to the Orlando Pirates app, you'll get all the information you need,'' said the Bucs coach.

Despite being inactive for close to five months due to the suspension of football programme in the wake of Covid-19 fright, Pirates managed to finish the match against Sundowns stronger, showing no signs of expected fatigue. For their endurance towards the end, Zinnbauer heaped praise on their medical and conditioning personnel.

"We have worked normally on the conditioning. We have a very good staff, a very good fitness coach. a good rehab coach," said Zinnbauer.

Bucs' strength against Downs came from the midfield where Ben Motshwari and Fortune Makaringe combined brilliantly to create a few chances.