Zinnbauer hails the work of the Orlando Pirates fitness staff 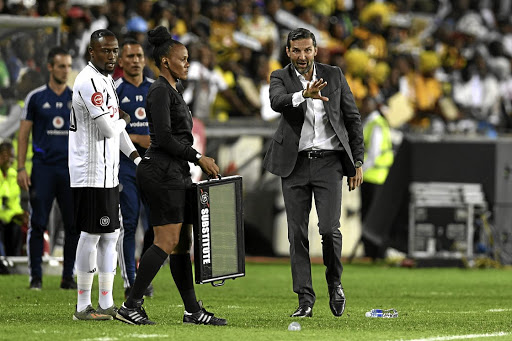 Orlando Pirates coach Josef Zinnbauer has hailed the work of his fitness staff getting his team in shape for the return to football‚ after the Buccaneers appeared relatively well conditioned as they were unfortunate to draw 0-0 against Mamelodi Sundowns on Tuesday evening.

The Absa Premiership returned with a match-up normally marked by its fireworks at Dobsonville Stadium‚ which on this occasion was markedly more subdued as both teams showed the effects of the five months of inactivity from the suspension of football due to Covid-19.

Sundowns‚ with a match more practise having edged Bidvest Wits 3-2 in their Nedbank Cup semifinal on Saturday‚ were that margin sharper to shade play in the opening half.

Pirates grew in strength as Downs tired in the second half‚ Bucs spurning some clear chances including Fortune Makaringe striking the upright.

Zinnbauer said Pirates’ big squad and the hunger for positions has also helped in motivation.

“We have worked normally on the conditioning. We have a very good staff‚ a very good fitness coach‚ a good rehab coach‚” Bucs’ coach responded in his online post-match press conference.

“Maybe like [looking at] the other teams or we have an input from the group and we discuss.

“I have the same feeling now that we can play 90 minutes or more. We have three days’ rest to our next game‚ and the players can make 90 minutes of play.

“But we have a good squad‚ and sometimes four players in a position. And the players make pressure from behind – they want to be in the team and in the starting XI‚ and this is maybe the reason for what we [are able to] do.

“And also the medical team. I find in all this a circle of a solution for us.

“And I am very happy to see today how we can run and find the short sprints and the long sprints. And all the conditioning I think was better than the opponents.”

Pirates’ preparations were disrupted by key attackers Thembinkosi Lorch and Justin Shonga being excluded from the team’s camp in the biologically safe environment due to an undisclosed “breach in the team’s protocol”.

Zinnbauer could not elaborate on the details of this‚ nor when he found out‚ nor whether it disrupted his team selection for this game.

“It was the decision by the team and if you need any information please go to the Orlando Pirates app. All the information that you need is there‚” was all Pirates’ coach would say on the matter.

Pirates‚ who moved above SuperSport United from fourth to third place from the point gained‚ host Bidvest Wits in their next fixture at Ellis Park on Saturday.