Sundowns and Pirates labour under Covid-19 conditions to goalless draw 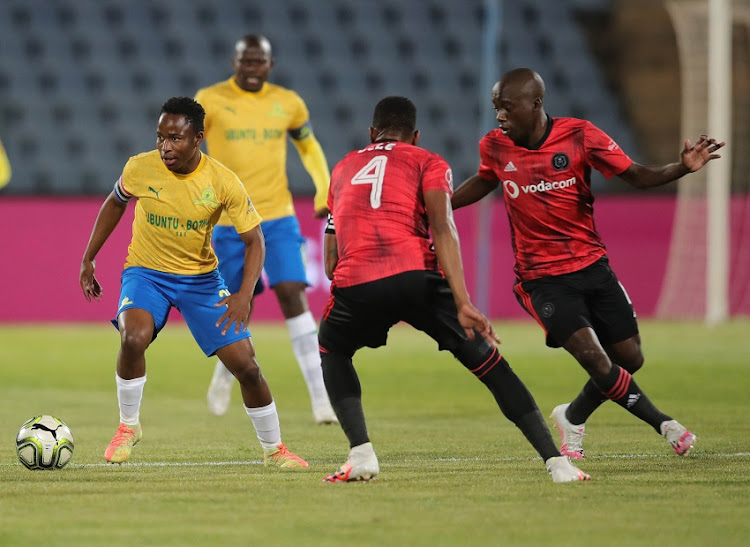 In a sign of the state of footballers’ fitness from the fallout from Covid-19, even Mamelodi Sundowns and Orlando Pirates laboured to a 0-0 draw in the opening game of the return to football of the Absa Premiership on Tuesday night.

The two teams managed a decent tempo, but the fireworks almost always associated with this perennially much-awaited fixture were notably subdued.

Pirates, fresher, seemingly, with this their first game back, managed the far stronger finish of the two teams, edging the second half.

Sundowns coach Pitso Mosimane displayed the kind of squad management that will have to be displayed in, as he has termed it, “football under Covid-19” in the Gauteng biologically safe environment (BSE).

With a second intense match-up, following Saturday night’s 3-2 Nedbank Cup semifinal win over Bidvest Wits, for legs nowhere near conditioned enough for such a programme, Mosimane had Lebogang Maboe at right-back. Substitute scorer Keletso Makgalwa came in at false No.9 for Sibusiso Vilakazi, who limped off against Wits.

Pirates should have been coming into the game fresh and without team selection complications. Instead the news of key performers Justin Shonga and Thembinkosi Lorch being omitted from the BSE for an unnamed “breach of the team’s protocols” disrupted coach Joseph Zinnbauer’s flow.

Downs had the benefit of knowing the conditions of playing in Covid-19, and Pirates the freshness of this being their first game back.

It cannot be said enough – five months of being housebound, and a month of training, just a week of that as a squad and contact, will make for football between players with legs of concrete.

And if even Sundowns vs Pirates – guaranteed to be the highlight of action on a PSL calendar – can produce a match-up that, while it had some tempo, was far from explosive, that shows a lot.

In the opening half, two teams renowned for an ability to pry openings in any defence produced one clear chance.

Sphelele Mkhulise’s low squared ball from the right found the touch of Themba Zwane at the near post to force an impressively sharp reflex save from Wayne Sandilands.

Pirates, bravely aiming to play high up the field against Downs, showed signs of shaking off the cobwebs as a one-two combination with Luvuyo Memela, on at the break for Augustine Mulenga, saw Fortune Makaringe scythe through the middle and roll an attempt onto the left upright.

Bucs’ relative freshness appeared to be benefiting them, as Gabadinho Mhango and Memela’s persistence saw the latter through on the right to force a save from Denis Onyango.

Vincent Pule’s speculative lob from the left edge of the area had to be tipped over by Downs’ goalkeeper.

The fresh legs of Jose Ali Meza and Tebogo Langerman, for Makgalwa and Mosa Lebusa, seemed desperately needed for Dows in the 73rd minute, and brought some balance back into the game.