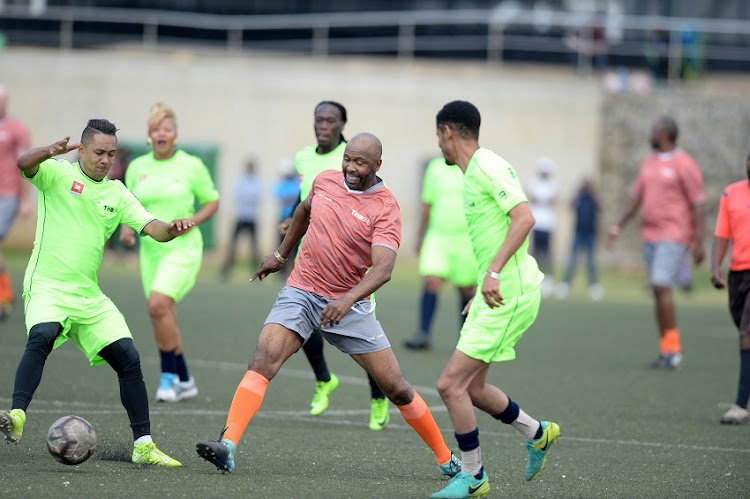 Stanton Fredericks of Team Celeb and Lucas Radebe of Team Legend during the Game of Unity and Heritage match between Team Legend and Team Celeb at Nike Football Stadium on September 24, 2019 in Johannesburg, South Africa.
Image: Lefty Shivambu/Gallo Images

Kaizer Chiefs could complete a memorable year for retired former player Lucas Radebe if coach Ernst Middendorp's charges manage to fend off the rivals snapping at their heels and win the league title this season.

Radebe is still walking on a purple cloud after his erstwhile club Leeds United's fairytale ascent to the English Premier League recently. The former Chiefs defender hopes to make it a double celebration in the next few weeks should AmaKhosi win a title that has eluded them since ex-coach Stuart Baxter led the Absa premiership leaders to the winners' podium in May 2015.

“I think the players are prepared and I think mentally they have to get ready to start where they left off‚” Radebe‚ who spent five fruitful years at Chiefs between 1989 and 1994‚ said.

“They need this title more than anyone else and I think they’re capable of winning it. To see how they’ve played and how they’ve conducted themselves up until now‚ it’s been absolutely great.

“Not forgetting that Pirates‚ Sundowns and other teams are right there behind them‚ Chiefs will be pushed to realise this great moment of winning the championship. So it’s going to be tough but I think they’re capable of winning it.

“Nevermind Covid 19‚ we’re all in the same boat. It’s a matter of coming back and focus on what we want to achieve as a club.”

Radebe feels Chiefs can emulate Leeds by winning the Absa Premiership in the same season in SA as the Premier Soccer League gears up to resume the campaign that was halted in March.

When the outbreak of the coronavirus forced the season to be halted‚ Chiefs were four points clear at the summit with second-placed Sundowns furiously snapping at their heels.

Sundowns have a game in hand and while Orlando Pirates‚ SuperSport United‚ Maritzburg United and Bidvest Wits are also lurking in the shadows‚ perhaps it is coach Pitso Mosimane's charges that have the strongest chance of stopping Chiefs from celebrating a title triumph on the year of their 50th birthday celebrations.

Amakhosi‚ who had played 22 matches when the season was stopped‚ resume the title chase when they host Wits at the Orlando Stadium at 6pm on Wednesday next week.

While the very public and messy bickering between the PSL and Safa a few weeks ago raised doubts over whether the season would be completed‚ Radebe said was always confident that sanity would eventually prevail and the two organisations would find each other.

“I never thought the season would be cancelled because there were dates that were already put aside to commence‚” said the former Bafana Bafana skipper‚ who formed a great defensive partnership with Neil Tovey‚ Bricks Mudau‚ Gardner Seale‚ Ntsie Maphike and Trevor Mthimkhulu‚ among others‚ in the Chiefs rearguard.

“I think every Chiefs fan is excited about the prospect of the club winning the league title this season. Looking at how they’ve been playing‚ they’ve been working hard to make things right.

“I’m a year older than Chiefs and the beautiful thing is that the vision and goals of Kaizer (Motaung‚ the owner) is still there and it’s absolutely amazing that they’ve managed to keep it that way.

“All the credit goes to him (Motaung). Yes unfortunately we can’t celebrate because of this pandemic‚ but this year will still be highlighted in many years to come in the history of football where football was abruptly stopped (by coronavirus).”