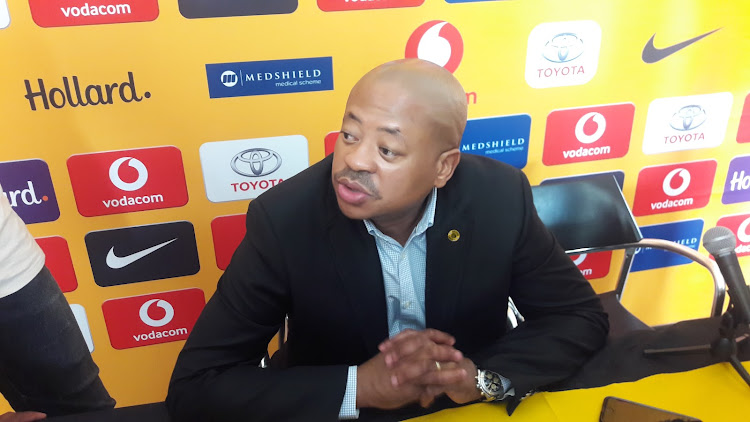 Kaizer Chiefs football manager Bobby Motaung speaks to the media during a press conference at their base in Naturena, south of Johannesburg, on Monday December 10 2018.
Image: Mninawa Ntloko

In a shock move Kaizer Chiefs have suspended Bobby Motaung following a series of incriminating videos that went viral in the past week allegedly showing the club's football manager partying during the national lockdown.

This was announced by Chiefs on their social media platforms and official website on Tuesday afternoon.

The move comes as a huge surprise. Bobby Motaung – son of owner Kaizer Motaung and half-sibling to club officials Jessica‚ Kemiso and Kaizer Junior – has largely run Chiefs' signings and hiring and firing of coaches‚ and been influential despite a reputation for an at times extravagant lifestyle.

Chiefs' statement read: "As part of our policies and continuous process of monitoring the public conduct of our members‚ players‚ and staff‚ Kaizer Chiefs has decided to summarily suspend Football Manager Bobby Motaung.

"This is a result of a number of videos circulating on social media wherein the Football Manager is seen taking part in festivities during what looks like the lockdown period. The Club has been involved in the internal processes of investigating his conduct‚ which led to the decision to suspend him.

"With the Covid-19 pandemic‚ our processes have been intensified and stringent measures have been put in place to ensure the Club and its members play a role in the curbing of the spread of the virus and flattening the curve.

"Subsequently‚ the Club would like to confirm that Bobby Motaung is suspended with immediate effect up to and including 31 August 2020. He is not allowed to accompany the team to any training session or scheduled matches.

"Even though he has tested negative on three occasions for Covid-19 during the club’s mandatory tests‚ he is ordered to remain home and self-quarantine during this time.

"This is in line with the rules and regulations of the Club according to the protocols that we have put in place.

"The Club reaffirms its stance to all stakeholders of our commitment to play an exemplary role to assist in the fight against the spread of the pandemic."

Motaung's alleged behaviour displayed in the videos came under huge criticism‚ more so as it appeared to precede in its timing the return to professional football of the Premier Soccer League in a bio-safe bubble from Saturday.

Chiefs lead the Absa Premiership from when football was suspended by the PSL on March 16.