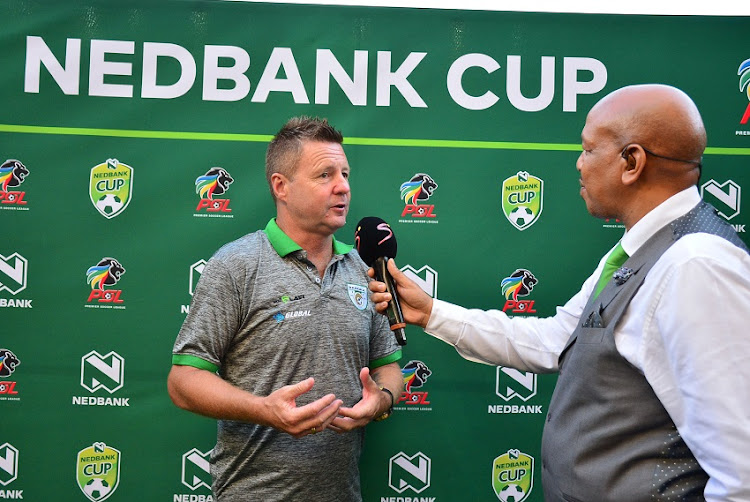 Many Premiership coaches have said that with no crucial friendlies for players to stretch out in semi-competitive conditions‚ they believe their first two to three league games have to be effective warm-ups.

The teams in the Nedbank semifinals‚ which kick off the return to professional football in Saturday's Orlando Stadium double header‚ do not have that luxury‚ coming back from four-and-a-half months inactive‚ with just under a month of organised training‚ in a must-win scenario.

"You cannot have four-and-a-half months without kicking a football‚ and then come back to training and play at a level that I would be happy with‚ the chairman would be happy‚ and that the fans would be happy watching‚" Kerr told an online press conference of the SA Football Journalists Association.

"And we've seen it with La Liga‚ the Bundesliga and the EPL. A lot of top players have been missing form certain games. It's affected a lot of clubs‚ especially those at the bottom‚ which is where we are in the PSL.

"And if I lose two‚ three‚ four main players I've only got youngsters to turn to who have not got experience. Especially playing two games a week‚ in such a small period of time.

" ... It's going to be tough. I'm not ready yet. I'm not happy playing my first game on Saturday knowing that I should have three weeks more to get my team in the shape‚ and the mentality of these players‚ to play in these games.

"And it's just going to be who can survive the fittest in the 90 minutes‚ and who wants it most to get to the final of the Nedbank Cup.

"It's about having the better heart‚ being tough upstairs‚ and making sure that when you've got the ball don't give it away‚ because the last thing you want to be doing is chasing."

Kerr said his players do not have the facilities at home that some better-paid stars of bigger clubs might have‚ such as home gyms.

The lockdown that followed the initial suspension of PSL football in March 16 saw players initially confined to their homes. From level four they could train individually on the street.

That still was far from organised training‚ and‚ as per the PSL's directives‚ even that started with individual exercises‚ then small-sided groups‚ and then only this week‚ Kerr said‚ as a squad.

"I can't make any excuses‚ and don't want to. But we've not had a [normal] preseason of six weeks‚ after about a month off - we've had five months practically without kicking a football‚ and the come back and straight away started our preseason at week three.

" ... Yesterday should be day one of the six-week preparation. We've actually started at week three. We've done a week's training with three-quarters of a squad‚ then a week with small groups of five‚ and then this week we've actually started some small non-contact games.

"And then in the next five days we've got to start to put together a plan for the game against Bloemfontein Celtic."

Baroka also are far from safe in the PSL relegation scrap in 13th place‚ just three points (23 from 24 games) above last-placed Black Leopards (20 from 24).

Bakgakga and Celtic play the first Nedbank semi on Saturday at 2pm‚ with Mamelodi Sundowns meeting Bidvest Wits in the second at 7pm.