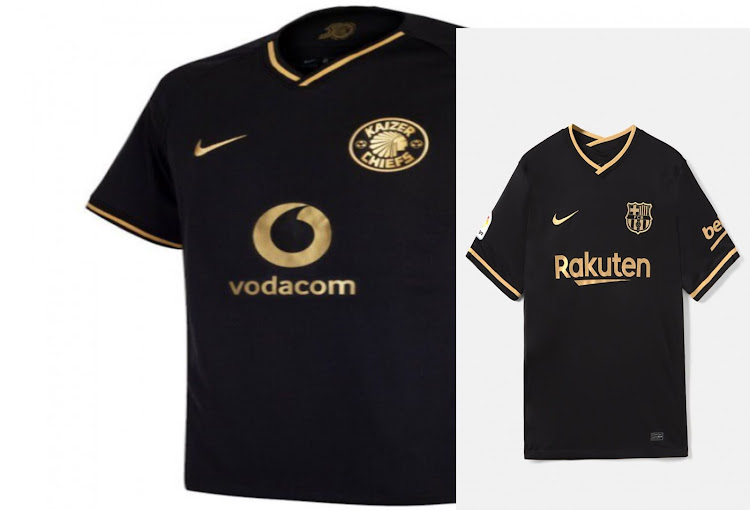 Kaizer Chiefs have expressed their surprise that a new Barcelona jersey is so strikingly similar to Amakhosi’s commemorative 50th anniversary jersey released in January.

Chiefs’ marketing director, Jessica Motaung, said the issue of Barca’s new black and gold Nike away jersey being an almost exact replica of Chiefs’ strip compounded the disappointment the Soweto giants had felt that so few of their 50th anniversary shirts had been printed.

Chiefs’ commemorative jersey was released in early January and sold out in days.

The clash with Barcelona’s new kit has seen Amakhosi supporters voice their disgruntlement on the Catalan club’s Twitter posts launching the shirt.

“I’ve had several discussions with Nike about it,” Motaung told TimesLIVE.

“Look, we were actually very instrumental in the design of our 50th anniversary jersey.

“The chairman [Kaizer Motaung] was very clear about the colours. Because if you remember the chairman had a black jersey with gold that he wore many years ago.

“They had the gold numbers and the things like that. And that design was extremely club-inspired, and we were very specific. Some of the designs that we received were not quite there, and we were clear on the heritage and what we wanted.

“We were very clear about the importance and magnitude of it, and that it wasn’t a small milestone for us. And we loved what were arrived at, and I appreciate the work that Nike has done.

“ I was made aware of the new Barcelona design before it hit the market, and I have to be honest we were surprised.

“Also because of the major outcry for stock that we had [for the 50th jersey]. It should have been produced for a market that was very excited for a 50th jersey.

“And I understand that Nike does projections and they look at past things, but this was a significant milestone that we knew would catapult demand.

“And we were advised about the lack of material that we used for our jersey. So we were surprised when we saw the Barcelona jersey.

“I do know that certain designs will be used again. But the timing was also very soon.

Not only do you lack trophies, you also lack of originality 😪 pic.twitter.com/McaDgyqcQ6

“But that said it’s a beautiful jersey and I hope that the gold and black does for Barcelona what it’s done for us.

“We have a wonderful partnership with Nike, but in this instance we’re slightly disappointed that we missed the opportunity to really take it further with our supporters for our 50th at the level that we anticipated, and also to leverage revenue.”

Nike SA communications manager Fareed Mohammed was reached for comment on the matter on Friday, but said he could not produce a response by close of business that afternoon.

An Ace up their sleeve for TTM

Oupa Manyisa has described his time at Mamelodi Sundowns as a memorable one.
Sport
1 year ago

Star midfielder Lebogang Manyama says he is happy to be back on track in an impressive manner at Kaizer Chiefs‚ the club he supported in his youth‚ ...
Sport
1 year ago

Thela Ngobeni has described his stay at Mamelodi Sundowns as frustrating, yet it gave him life lessons.
Sport
1 year ago
Next Article